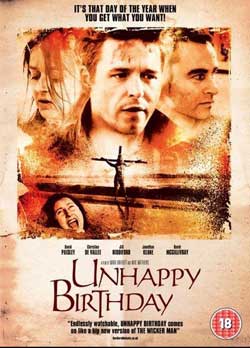 Set in and around the remote tidal island of Amen, Unhappy Birthday is the fictional story of three outsiders’ battles against the twisted morals of an antiquated community. Inspired by British cult classics such as The Wicker Man and Hammer House of Horror, the film explores the fear of isolation and nature versus nature. A special birthday party becomes a living nightmare for City-dwelling couple Sadie and Rick and their friend Johnny. They visit Corinne, an enigmatic local on the island of Amen, which is accessible only by invite and seemingly impossible to get off. A mysterious family connection with Corinne brings horrific consequences as they find themselves trapped by the tide and at the mercy of the island’s wild nature.

I’m a person who is very hard to please and honestly I do not suffer mediocrity well. Granted having high standards of has often made me quite unhappy yet there is a flipside to this. Which is what I find something that is good, or even exceeds to excellence it becomes the utmost joy for me to partake in and even little things that meet such a standard can make my whole day. I am starting off an excellent day because I woke up and watched “Unhappy Birthday.” 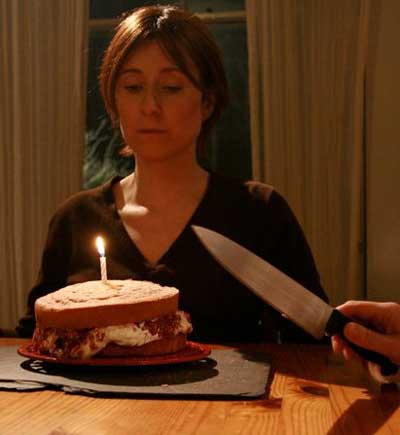 There are many films that work towards playing with a person’s head and more screwing with you through atmosphere than anything else. On top of that I think one of the hardest things to do is to make a dramatic horror film. That is to say one that avoids camp, that doesn’t wind up taking itself so seriously that it becomes laughable and yet is basic enough that you easily fall into the depths of suspension of disbelief. Some examples of what I mean by atmospheric horror would be the 1963 “The Haunting,” “Them,” and “The Exorcist” films that really let your imagination go creeping into the darkness and worked heavily with sound design. “Unhappy Birthday” definitely falls into the category of atmospheric horror.

Set in the United Kingdom on a semi-secluded island Rick takes his girlfriend Sadie to meet for the first time her long-lost sister for her birthday. Along with Rick and Sadie is their mutual friend Johnny… 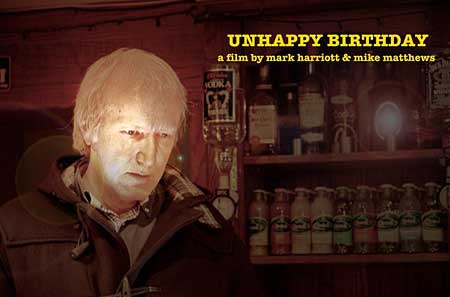 The tension is created by Rick and Johnny having an affair behind Sadie’s back this is coupled with the fact that Rick and Sadie are trying to conceive a child, however being that Rick is firing blanks Sadie has taken it upon herself to become impregnated with Johnny’s child unbeknownst to Rick and the residents of the island seemed to have a very uptight and conservative moral standard with some weird religious stuff going on in the background. This all happens with Sadie’s highly judgmental long-lost sister Corinne watching the drama unfold. I don’t want to give too much away about the film. “Unhappy Birthday” has a kind of slow burn pacing to it with so much of this film constantly has you wanting to know what is going to happen next.

This film is sharply directed, intelligently written and the execution of dramatic elements in this film is superb. “Unhappy Birthday” really knows how to press tension and create highly uncomfortable situations. There is very little mess in the film but I feel that the gore in this film is not minimal because the filmmaker’s (Mark Harriott, Mike Matthews) were not holding back, but rather it just didn’t fit. Also I don’t think they were really worried about holding back because they do show you quite clearly the relationship between Rick and Johnny.

The photography of this film is stunning, well executed and is a mix of time delay shots and intimate handheld work that isn’t overly jerky. It’s evident that cinematographer Mark Hammond knows what he is doing, the film plays and views like all the lighting was highly intentional, I don’t know the how much of it was available light but everything looked natural.

Every aspect of this film is highly creative and really takes a fresh approach to plot, characters and even the idea of setting. Because the semi-secluded Island is accessible by car only when the tide is out and the road washes away every high tide. 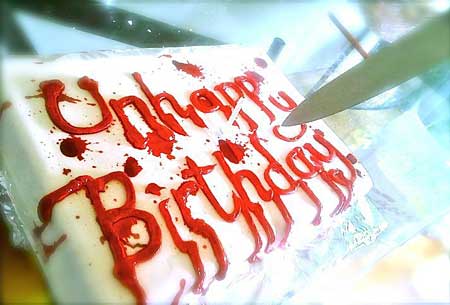 I probably watch somewhere between 20 to 35 movies in a week pending upon my schedule, mind you I don’t watch television I just watch movies, that being said I see a lot of crap films. When I say something is an awesome film trust me it is, do everything and anything you can to see it. My only disclaimer is this is not for gore hounds or people who are very uptight. If you enjoy creepy films that work the audience this is for you.