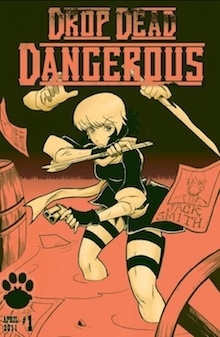 “They thought it was over. They were wrong. Back on the hunt for the maniacal figure known as The Raven, private detective Jack Smith must face a nightmare from his past— but not all is as it seems. A new evil comes to town as he and his dumbstruck partner Alice, a young woman with secrets of her own, get tangled in a web of deception without realizing that the most dangerous truths are the ones they keep from each other. Meanwhile, The Raven paints the town red as the clock starts ticking for a final showdown in this debut issue of DROP DEAD DEAD DANGEROUS, a murder mystery manga by Chad Cabrera and Mike Banting set in the weird, weird west. Who will be left standing… and who will be left in pieces?”

Artwork: 4.5 out of 5
Fans of the artwork found in Hellsing and Priest gather around because this book is right up your alley. This book had its moments where I didn’t quite see what was going on in the action scenes, but there might have been only 2 max. This book is drop dead GORE-Geous plain and simple. While it does look like most Manga style titles, it’s consistent from panel to panel , and the death scenes are to die for. Character design is solid, but I have to bow down to the decapitation scene in issue #1. I love the look on these books.

Story: 4.0 out of 5
The story here is something I have been wanting for a while in comics, a serial killer story that has legs. The dialogue had its choppy moments, but overall moved me along at a great pace. A serious and yet cheesy, but great cheesy, highlight was during the decapitation scene because the wording was perfect. The written action, the suspense, the poetry, it is all a mix that is blossoming as the issues go on. I have no doubt that issue #2 and beyond will drive this book and it the same level as the artwork.

Dying Breath: 4.5 out of 5
This book was an unexpected surprise. I am shocked that it’s not in Antarctic Press’ line of horror titles (yet). I love the concept, I love the setting, I love the writing and I love the artwork. I want more of this and I want it now. This book is being done right so far. It is hitting on a subject in horror comics that is not often done and that is a shame. If you want a serial killer title that is on track to having it all you need to read this book.

If you would like to buy or know more about Drop Dead Dangerous you can find it at www.facebook.com/DropDeadDangerousComic 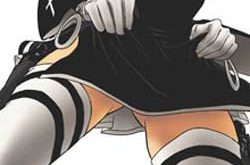