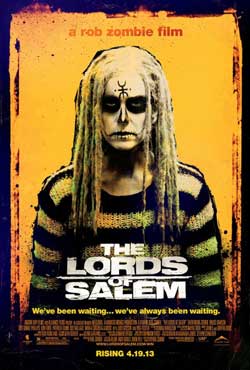 Heidi, a radio DJ, is sent a box containing a record — a “Gift from the Lords.” The sounds within the grooves trigger flashbacks of her town’s violent past. Is Heidi going mad, or are the Lords back to take revenge on Salem, Massachusetts?

Rob Zombie’s filmography is still on the short side as he’s only directed five movies (Including this one) up till now yet his films have always attracted a rather rabid audience. In addition, his films have pretty much divided audiences & critics right down the middle. You either love his movies or hate them, there is little to no in between. His latest film “THE LORDS OF SALEM” has been anxiously awaited since it was announced last year & it doesn’t have a family of psychopaths (“THE DEVIL’S REJECTS”) or a single unstoppable one (“HALLOWEEN”) propelling it. This time it’s all about witches with a score to settle. 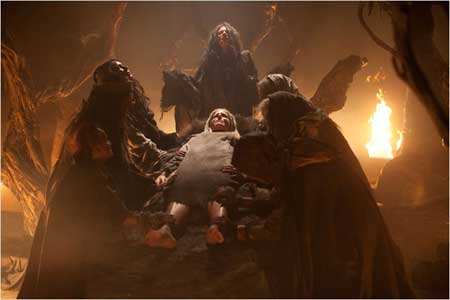 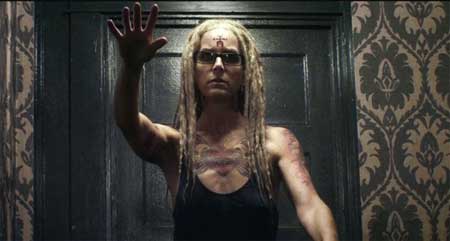 Sheri Moon Zombie (Rob’s muse) stars as Heidi Hawthorne, a successful radio DJ in Salem, MA who receives a L.P. in the mail one day that has no label on it. The only clue as to whom it’s from are two words “THE LORDS”. Assuming that that’s the name of the group she plays the record on the air while interviewing an author (Bruce Davidson) who’s plugging his latest book on the Salem witch trials. The strange dirge-like music has an odd effect on Heidi & other women listening to their radios. Immediately thereafter (& for the next seven days) Heidi has violent dreams featuring a coven of extremely unattractive witches who have a beef with the Hawthorne clan & the entire town of Salem. The unoccupied apartment adjacent to Heidi’s suddenly seems to be occupied as well but Heidi’s landlord Lacy Doyle (Judy Geeson) denies renting the apartment to anyone. Slowly and inexorably, Heidi mind is being usurped by the malevolent witch clan. But what do they plan to do with her?

Zombie’s ideas of witches aren’t what you’re used to seeing either. His witches are both old & young, decrepit, filthy and extremely nude. I guess I don’t need to say that they aren’t the kind of women you’re gonna enjoy looking at but they are extremely effective in conveying the menace they represent to Heidi & the town of Salem. Their leader, Margaret Morgan (Meg Foster), is an especially foul looking beast. Nude & covered in filth with a mouth full of rotted teeth she’s the true star of the film. Foster gives what I think is one of the bravest performances I’ve ever seen in a horror film. Her transformation into the character is so complete that on her first appearance in the film I thought I was looking at Brad Dourif! She even wears dark contacts so her unmistakable blue eyes are gone. I don’t mean to call her unattractive (She isn’t) but her transformation into Margaret is a complete one. And most of her scenes are played in the nude! She’s wearing an animal skin over her head in a few scenes but that falls over her back so her nude scenes are full frontal ones and since she’s smeared with filth throughout the film her visage is an extremely foul one. It’s isn’t very often that you’ll see an actor of her age take on such a demanding (& revealing) role. I know that to say that she’s worthy of award recognition is folly but I’m gonna say it anyway! She deserves acclaim for her performance & I hope she gets some. 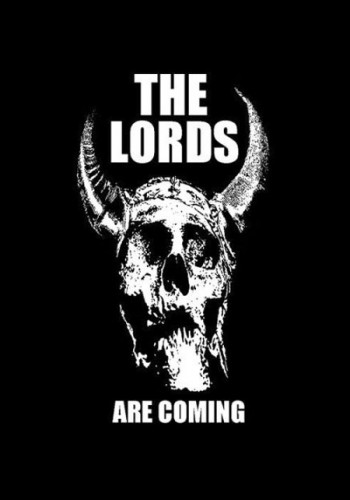 “THE LORDS OF SALEM” is full of strong female characters. The aforementioned Judy Geeson has two sisters, Megan (Patricia Quinn) & Sunny (Dee Wallace) and although you know something is off with all three of them as soon as they appear it doesn’t make their roles any less menacing. Quinn in particular has a really Satanic way of rolling words off of her tongue. Wallace comes off as simple at first which only makes her bouts of violence that much more intense & shocking. Ken Foree (Herman) doesn’t have too much to do but he’s never anything less than convincing anyway & there are hints of a past relationship between Heidi & Whitey which aren’t ever fleshed out but Jeffrey Daniel Phillips gives the role a bit of pathos behind his (Rob Zombie-like) bushy beard. But the bulk of the film belongs to Zombie’s muse, Sheri Moon Zombie and while she gives a good performance I would like to see her in a role that isn’t directed by her husband. For me it’s a bit of a distraction watching her because as soon as she appears I’m thinking “She’s Rob Zombie’s Wife” & acting in his movies exclusively doesn’t help that feeling go away.

Despite it’s low budget, “THE LORDS OF SALEM” is gorgeous to look at. Cinematographer Brandon Trost does an exemplary job of keeping the film dark even in the few scenes that take place in daylight. The score by John 5 & Griffin Boice add to the sense of menace that Zombie has crafted through his use of imagery. And while I’m on the subject of imagery it should be noted that the second half of this film owes a lot to Stanley Kubrick & “THE SHINING”. That’s not intended as a knock either, I’m not a big fan of Kubrick’s film but I don’t deny that it looks incredible and Zombie had done his homework very well. His camera slithers along hallways & corridors like a python stealthily hunting it’s prey. A lot of the time I got the sensation of being in the room with the characters as they were going about their business, the proverbial “Fly On The Wall” if you will. 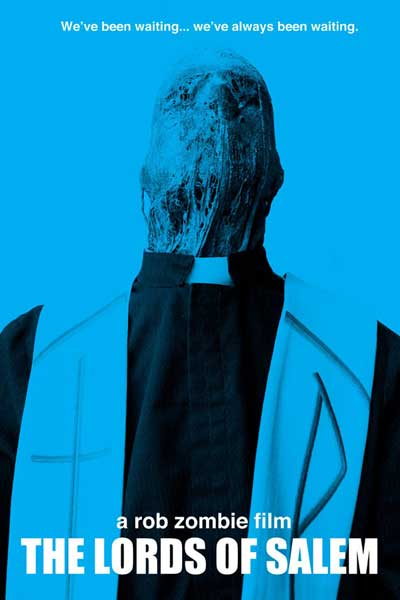 If any of you see this film expecting something bombastic & gory like “HOUSE OF 1000 CORPSES” or “THE DEVIL’S REJECTS” you’re going to be sorely disappointed. I suspect that a lot of people will be disappointed regardless of their expectations because of the near glacial pace & subdued ending provided by this film. Get it into your heads that Zombie isn’t trying to beat you over the head with horror in this film. He’s letting the mood slowly seep into your system & flow through your veins like a slow acting poison. As soon as the film started I felt a sense of unease that just got stronger & stronger as it continued. The only films I can compare it to in terms of overall mood are “THE EXORCIST” & “ROSEMARY’S BABY”. In both of those films there was a sense of doom that made itself felt as soon as they started and audiences knew all was not going to go well. “THE LORDS OF SALEM” has that same vibe to it and while it isn’t particularly scary, it’s really, really ominous & creepy. It sets out to make it’s viewers uncomfortable and it succeeds wildly. I don’t suppose it’s coincidence that all three of these films have women as their central characters. 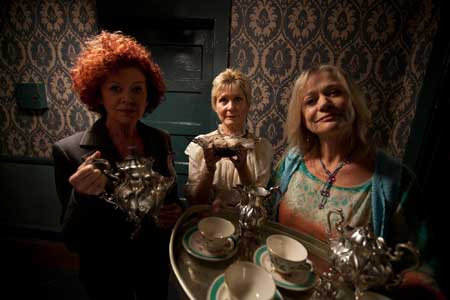 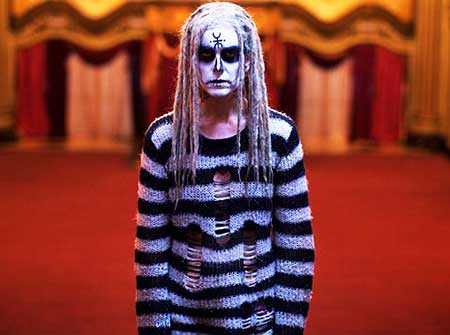 That’s not to say everything is perfect here though. As I mentioned earlier it’s an extremely slow film that demands your full attention. It’s not a particularly gory film either, although there are a few scenes of graphic bloodshed (& a wild scene where Heidi dreams she’s giving birth to something) so lower your expectations in that department also. I can see where the much discussed (& maligned) ending would put some people off but I thought it was pitch perfect, it’s not so much an ending as it is a warning….a warning that the horror has just begun. 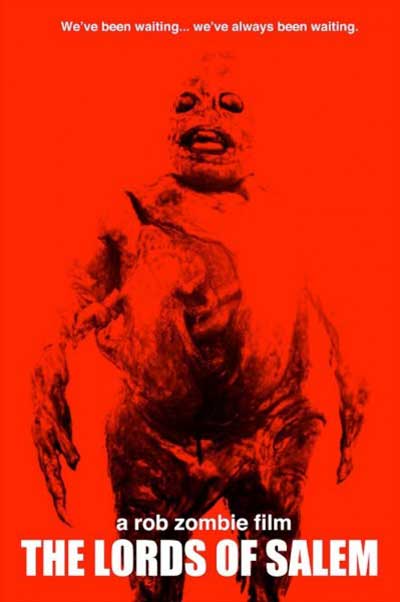 Overall “THE LORDS OF SALEM” is a masterful mix of both menace & mood that kept the audience on edge from beginning to end. In those terms it’s Rob Zombie’s best film by far but it’s not the scare fest I had hoped it would be either. Despite that it most certainly deserves a watch on the big screen even though the geniuses at LIONS GATE opted to open on only 354 screens, it deserves so much better than that. It’s like nothing I’ve seen this year and Zombie has proven himself to be a first class wizard of horror imagery! I cannot wait to see what he comes up with next time around.