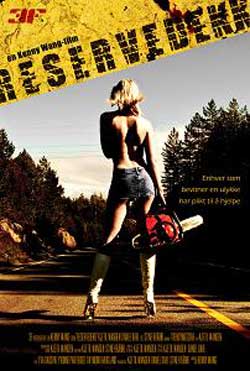 John is driving through the most godforsaken area of Norway, when he accidently gets a flat tire. By his attempt to change the tire he realizes that that his car wasn’t equipped with one. But as he takes a peek at the ditch next to the road, he sees a whole bunch of spare tires. While John is attempting to change his flat tire a nice guy comes along and offers him help. But all John wants is to be left alone?

REVIEW:
Spare Tyre is a 20 minute short film directed by Kenny Wang. The film is treated in a bright yellow mexicali tonality which depicts a traveler who develops a flat tire on his countryside side drive. Upon discovery he releases his captive, a woman who appears kidnapped, from the back of his trunk. Though we quickly find out that the lady is actually his girlfriend who likes to play sick games. The tire situation is only momentarily though a kind stranger stops to lend a hand. As he attempts to offer his tools, he is knocked unconscious.

Now, my first thought after viewing this short, was “what’s the purpose?” The highlight is heightened with an unconscious stranger who gets his limbs sawed off while being knocked out by the couple. Though there never seems to be a point for any of it. The flat tie is only situational and the attack on a helping stranger is out of place. It’s not so much that they resort to violence on screen, its that nothing really makes any sense. The 2 have sex next to the stranger and then saw him to bits…………boring. This kind of short forgets that to make a film work, it needs to have engaging content, not just some tits and a chainsaw seen.

This short brings nothing exciting or compelling to the genre and only exploits a gore situation that has no base. At this point I was glad it was kept at 20 minutes as I don’t think I could take more than 20 minutes of pointless premise.