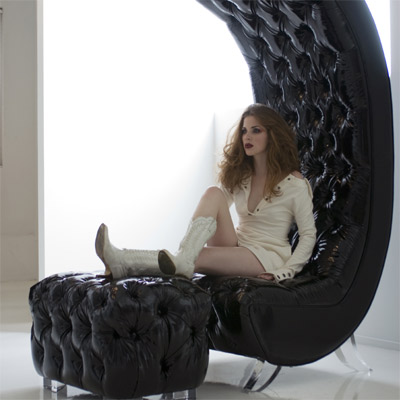 How did you get involved in this movie, “Welcome to the Bates Motel”?

I was involved with ‘Welcome to the Bates Motel’ from its inception. Byron Turk, the director, and I first traveled to The Bates Motel and Haunted Hayride a few years ago. We fell in love with the place and immediately started devloping a script for the location with my long time friend and haunt employee Cosimo Mariano. After acquiring a full length script with the help of writer JL Stremberg we approached the owner of The Bates Motel, Randy Bates. Randy was very enthusiastic about making a feature film and from there it was full speed ahead.

You’re from West Chester, PA and studied at The University of the Art in Philadelphia. From your perspective, how are the theatrical opportunities in the Philadelphia area and its surrounding?

I grew up in the Philadelphia area so it will always be my home, even if I live three thousand miles away in Los Angeles California. There is some amazing theater happening in and around Philly, I was lucky to be a part of that community at an early age. Philly has an extremely rich preforming and visual art scene. Before leaving Philadelphia for the west coast I appeared in hundreds of live performances, and was able to work with many amazing artists.

How was it working with Bryon Turk on this movie?
Byron is a incredibly hard worker! His determination drove the whole production team throughout filming. Despite his determination Byron was always able to maintain his patience and was willing to listen to any suggestions that his crew had to offer. He is one of the best directors that I have ever worked with and I consider myself very lucky to know him.

What is the scariest part of Bates Motel and Haunted Hayride?

How is that attraction Bates Motel and Haunted Hayride incorporated in the
movie?

The ‘Bates Motel and Haunted Hayride’ provides the main setting for the film. The majority of principal photography took place on the grounds of the haunt. In the begining of the film Lilly Hansen dies in a freak accident while preforming a stunt in the Haunted Hayride. One year later Anges, My character in the film, is forced to get a job there and begins to uncover the truth about her friends death.

What can you tell us about your character in “Welcome to the Bates Motel”?

I loved playing the role of Agnes. In the beginning of the film Agnes is a troubled girl and her life is really stuck in a rut. Despite her troubles Agnes is able to motivate herself to uncover the truth behind her friends death. She is defiantly more of a tom boy than I am, she wears combat boots and knows how to shoot guns. Agnes is never afraid to dig a little deeper and get her hands dirty, she may be a little scared but she is willing to go there anyway…I love that about her.

Do you have a favorite scene in the movie?

I love the scene in the haunted house near the end of the film. I don’t want to give too much a way, but those scenes were the most fun to film. When you see the film I think that you will know why.

Do you have any interesting behind the scene stories?

Walking around the location at night when the attraction wasn’t in full swing was always a hair-raising experience. The Pennslyvania woods are pitch black at night, and at The Bates Motel you never know when you are going to trigger an animatronic zombie that will pop out at you, or come face to face with a scare crow or some other creepy thing. The whole place is populated with people who LOVE to scare each other so you really have to keep your wits about you.

What are some of your favorite horror movie memories from your childhood?

Love Wes Craven films like ‘Nightmare on Elm Street’ and ‘Scream’ I really like ‘Halloween’ and ‘The Poltergeist’. I also like classic thrillers like ‘What ever happened to Baby Jane’ ‘Peeping Tom’ and ‘Silence of the lambs’

What other projects are you currently working on?

Earlier this year I filmed ‘Party like a Queen’ a National Geographic mini series about the best parties in history, I was cast as Marie Antoinette. The costumes were AMAZING, the corset they had me wear gave me a 22 inch waist! I also died on an episode of ‘1000 ways to die’ and I just finished filming a feature film called ‘The Red House’.