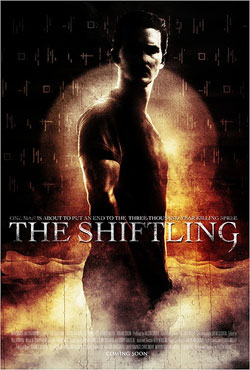 Allen Monroe is a writer/half-ass adventurer who learns of the existence of an alien being with the ability to change its appearance to look like anyone it wants (which is why it is called a Shiftling). With the help of his hot assistant Zoe, Monroe sets out to find a relic that will destroy the creature once and for all. While trying to locate this item he also has to avoid the ruthless Emmanuel Maxwell, his clueless henchmen, and the Shiftling itself (who all want the relic in question for different reasons). Will Monroe find the relic in time and save us all by destroying the alien menace? Will the Shiftling get to it first? Will you be able to watch this movie all the way through without fighting the urge to use the remote to fast forward through most of it?

First of all let me just start out by saying that I love low budget horror films. As a matter of fact, I would much rather watch a well-done horror film with a great story but no budget as compared to any mainstream, huge budget Hollywood “horror” movie. I think that there are many, many great independent horror films out there, and if you are willing to look hard enough you’re sure to find more than one that is a real gem. Sadly, I just don’t think that “The Shiftling” falls into that category. I wanted to like it, I really, really did but I just couldn’t do it.

The film starts off with a bald guy that kind of looks like unfunny comedian Dave Atell running from an unseen enemy. What exactly is he running from? I have no idea as it cuts to the opening credits before we get a chance to see it. From there we are introduced to Monroe, our main character (who looks like Christian Bale) who is hanging out in a tent in what appears to be the woods behind someone’s house. 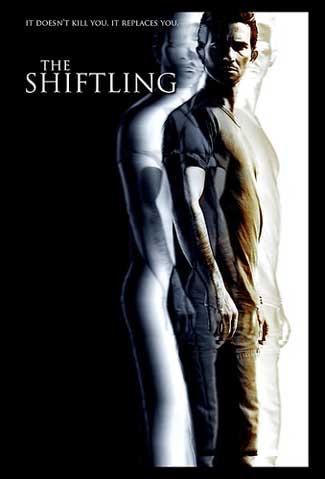 What is he doing there? I don’t have a clue. He leaves the tent and finds a little Indian boy our wandering around in the woods as well. They have an awkward conversation (in another language, no less), and the boy tells him about the Shiftling taking over the body of someone else (I think. Like I said they are speaking another language so I really have no idea what they are talking about). This scene is just one of many weird and confusing ones that left me scratching my head. To be quite blunt, for most of the film I really wasn’t sure what exactly was going on.

From there things just go progressively down hill. I won’t bore you with the details but it turns out that the bald guy (who was a friend of Monroe’s) was running from the title character at the beginning of the movie. He learns all about the Shiftling from some crude drawings in a book that look like they were illustrated by a failed comic book artist and takes it upon himself to stop the creature. We are then introduced to all sorts of “interesting” characters such as Zoe, who is basically just eye candy, and the evil Maxwell. Maxwell is your stereotypical villain who doesn’t want to destroy the creature because he claims keeping it alive will benefit mankind but in reality he wants it kept alive for an ulterior motive. 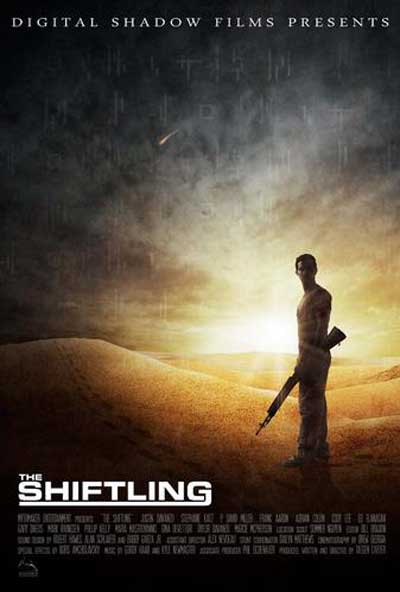 Did I mention that Maxwell has stereotypical henchmen that follow him around and do his bidding too? One of them is the tough, strong type while the other one is the bungling, incompetent one (who doesn’t even have a name and is actually credited as “Bumbling henchman” during the end credits) who tries his damndest to provide comedy relief (and fails miserably each time). When you put all of these characters together with an uninteresting plot and then add a badly written screenplay with a dash of horrible acting you end up with a pretty lousy movie.

While “The Shiftling” is not the worst movie I have ever seen I still couldn’t fathom the idea of sitting through it again. I didn’t care about anything that was going on or any of the characters and though it isn’t a very long movie it seemed to go on forever. On the plus side, most of the women in the film are attractive (especially Stephanie Katz, a real cutie who plays the part of Zoe) and the special effects aren’t that bad, but I wouldn’t recommend running out and renting the movie just because of those factors.

“The Shiftling” just wasn’t for me, but someone else may enjoy it immensely. As bad as I thought it was though, it was still better than anything overrated, mainstream filmmakers such as M. Night Shyamalan have done.