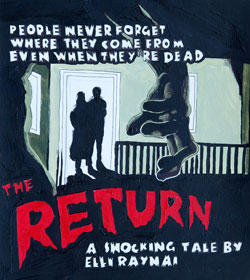 The Return is a short dramatic horror film that chronicles the struggles of a teenage boy, his family, and the zombies that lurk in the shadows of their neighborhood.

The Return is a short 2009 film created by Elli Raynai and Black and Blue Productions. FX work credited to Little FX. The film clocks in at 10 minutes. As we open into the scene in progress, Allen and his wife are taking about his son Elijah who ran away from home. This quickly progresses into a nightmare scenario with the table guests turning into zombies and criticizing Allen for letting him leave.

We find ourselves 1 year later after Elijah’s leaving in which in a brutal outside attack is revealed to be Elijah transformed into zombie. His mother welcomes him in ignorant to the obvious changes as well as his thankful family. Though the joke is on us as Elijah limps around, drools, and rolls his eyes constantly back into his head. The role is pulled of f pretty convincing in a humorous way that will easily put a smile on your face. Elijah is welcomed back into the family after a long absence, and we get a glimpse of the past thru a flashback of Allen trying to keep his son from leaving home. An argument breaks out while Elijah lying in the yard is attacked by a strolling zombie and bitten.

We never really get any clue as to why, or how and just accept the reality that the situations have happened. The short piece is edited and directed by Elli Raynai who does pretty good with the material he has. Too bad its only limited to 10 minutes as I was intrigued enough to check out more. This film is clearly meant as a horror comedy which is coming into a playing field that is pretty swamped with zombie comedies already.

A recent one that comes to mind that might draw a slight comparison is the film “Flick”, though really the project is an early attempt to create something of interest to submit to film festivals. When all is said and done, I think the project is a fine piece that will do well on the circuit. You can check it out at www.willhereturn.com/