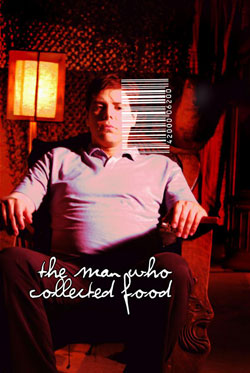 Miguel Appet is a serious collector. He must have the color variants, the rarities, the 1950s originals: every food he can find–and keep–in mint condition. No one but his overbearing mother knows that his home, tucked in the quiet suburb of Cibuston, has become a massive museum to comestibles. His neighbors to the right, dad Horace and son Eustice, don’t notice a thing as they plot their next deer hunt (in matching lumberjack plaid). His neighbor to the left, Kelvin Green, is too busy searching for the alien he’s sure attacked him once. And Miguel eats…people. He has to, since eating his precious food is not an option. However, being a cannibal is not as easy as it seems, especially when you have a collection of food to take care of…

“The Man who collected Food” is a highly original piece of work that explores the extent of obsessive collecting. Part horror and part comedy it explores an area I’ve yet to see. That is…one, the subject of food collecting and two, the resorting to cannibalism to keep from “eating” the collection. Miguel Appet (Mike N. Kelly) our main focal point lives almost as a recluse who ventures out to the debut of new products at the local grocery store.

His house is adorned with food packing items displayed in arrays of collections that are products of his obsessive compulsions to own items of every shape and color. Though he preserves every item in fear of it losing its pristine mint condition, he does suffer from a rather bizarre fetish. That is he has resorted to cannibalism at an early age so that he wouldn’t have to eat from his collection. He goes on to explain that people aren’t referred to as food so it provides a solution to keep from starvation.

Inside his house behind a locked metal freezer door, he keeps cadavers, frozen with captured teenagers who provide his daily needed nourishment. As they are chained to a wall he picks from them before dinner and lets the choice run through the house before killing him off for supper. While he does realize his mental issues, the compulsion seems to get the better of him. Self helps groups, dinner with his neighbor and socially trying to accept his surroundings always brings him back to his basic need for human meat and preserving everything else he finds. Even a simple restaurant outing turns to disaster as he notices a rare can of beans that he has to have for his collection. An over bearing mother doesn’t help his situation who has kept him sheltered most of his life in fear of influencing bad elements into his childhood.

Absurdity mixes nicely with gore and horror all nicely packaged under an odd premise with off characters to boot.

His neighbors come across even weirder with a white trash family who lives in a trailer on their house property and a eccentric next door neighbor named Kelvin Green (Gary Wagner) who hunts aliens for mounting in his living room. Horace and his son Eustice preoccupy there days with deer hunting whether its hunting season or not. Miguel just tries to cope with his neighbors as much as he can tolerate before he loses his mind.

The film is directed by Matthew Roth who handles the material like a pro. As a film, the movie is highly entertaining while still providing an original storyline that is a hoot to behold. While all the actors provide a nice base of lunacy, Mike N. Kelly is believable in his eccentrics and obsessive compulsions. Perfect for the part would be an understatement. His grocery store scenes were hilariously played that really helped sell the idea of his obsession. After watching this film I’m sure a few folks will inquire about the reality of food collectors. Which I would not be surprised but have personally never heard of the collectors market. Though the idea and circumstances are very much like the collectors circles of comics and beer can collections. Collectors will recognize the level of detail and attention that is given to the notion of wanting to own everything related to the hobby.

In short this film was a blast and provided a solid base of whacked lunacy and fantastic comedy horror.