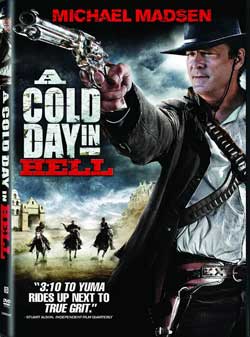 Sweetwater is just a small rural town in America’s old west which is currently being threatened by a local tycoon by the name of Scarsdale. Scarsdale is attempting to build up his own town and in the process of doing so decides that he needs access to a railroad so that his soon to be great town can flourish. Sweetwater decides to fight against the tycoon and enlist one of the most legendary men with a gun that the west has ever known.

“If you kill that boy it means I’d have to go all the way down the mountain to get my supplies….I don’t want to do that!”

I really wanted to like Christopher Forbes’s A Cold Day In Hell, I really did. The film is a western and is advertised as starring genre vet Michael Madsen. I was extremely excited when I saw promotional material for A Cold Day In Hell and was extremely let down when it finally came across my desk. Hacked acting, bad camera work, laughable fight sequences and worst of all cgi blood really made A Cold Day In Hell one of the most difficult films I have yet to review for Horrornews.net.

The plot behind A Cold Day In Hell seems legit enough. There is a tycoon who is named Scarsdale who is currently running people out of neighboring towns so he can build a railroad that runs directly through his own town creating a passageway into California. Scarsdale goes about his business by hiring a group of men who are known as the “company men” to do his dirty work. It isn’t long in the film before the viewer gets to see the company men take care of a small town called Saddle Mountain, in quite a laughable sequence if I must say so.

A subplot to A Cold Day In Hell is revealed not to long after this when a young girl named Elizabeth Drayton begins to search for her mother and father, she eventually finds herself in Sweetwater where the local sheriff and priest decide to help her on her journey to find her father….the legendary gun man named William Drayton.

It doesn’t take a rocket scientist to figure out what happens next, Elizabeth finds her father and the town of Sweetwater enlists his help to defend their town against the corrupt Scarsdale and his group of thugs. By the way Michael Madsen’s character is none of the ones I have mentioned yet.

Genre vet Michael Madsen plays as a local marshal who is named Stallings and he is interested in learning more about Scarsdale’s men, this translates to most of Madsen’s screen time being played out in a bar talking to an “inside guy” and the local serving girl. Madsen really doesn’t even appear on screen with many of the main characters of the film, instead he is given a bit more than a glorified cameo, but in truth his character really has nothing to do with the films story and the horrible use of cutaways and editing make it really hard to enjoy many of his scenes. 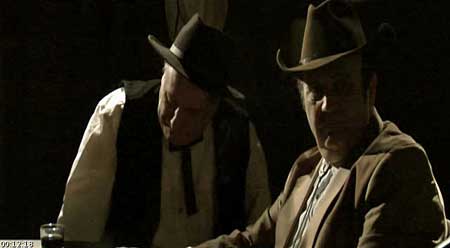 A Cold Day In Hell is an indie effort and it really does feel that way, the sets look like some sort of amusement park’s side area and the action sequence’s are truly laughable particularly the sheriff of Sweetwater who spends most of the films gun fights rolling around on the ground. There is a bar fight near the beginning of the film however it too is quite laughable and seems like it was just filmed so some folks could throw some glass against the wall, which I wont lie if I was involved in this I too would want to break some things myself.

A Cold Day In Hell does have one good thing going for it however and that is the costuming. Even though the sets and settings are laughable (the train looks like a model train filmed in close up) the costumes are quite good, but good costumes do not make an enjoyable film.

I respect and admire all of those who work within the film industry but I simply cannot support A Cold Day In Hell, even as a fan of Michael Madsen I really feel the need to warn others to stay away from this film and not waste their time….yes it really isn’t that good at all.