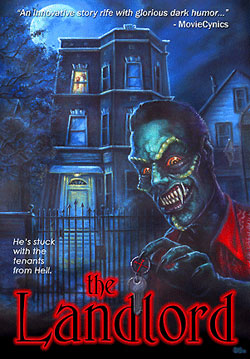 The Landlord is the story of Tyler, the unfortunate young owner of a demon-haunted apartment building. While finding tenants has never been a problem for Tyler, keeping them alive long enough to pay rent is. No matter how nicely Tyler asks, he cannot keep the demons from eating the renters (nor even persuade them to wait a month or two). The demons never listen. And why should they? They have an all-you-can-eat buffet of delicious human flesh and Tyler as their pet monkey. But all that might change when Tyler takes a liking to the newest tenant, a desperate young woman running from demons of her own.

“The Landlord” is one of the rare independent horror films that, despite budget constraints or experience, is able to overcome the obstacles and is able to not only entertain, but also bring some originality to the table in a genre that tends to repeat itself with rip-offs and remakes. This is one movie that I almost missed, luckily I spoke with the films star Derek Dziak who was very enthusiastic about the film he and his friends had work so hard to put together. Needless to say, I am glad I got a copy of the film from him, it’s a fun twisted little ride worth taking.

Tyler (Derek Dziak) is the super of a 3-unit apartment building. He lives in one of the units and rents the other two. The problem is that he has trouble keeping tenants when the apartment is being haunted by a pair of demons who are constantly hungry for human flesh. Though Tyler is reluctant, he helps the demons find their meals until he develops a crush on the newest tenant, Donna (Erin Myers). Not only does he have the demons to deal with, two cops are trying to pin the murders on him while his cop sister Amy (Michelle Courvais) has an agenda of her own.

What struck me was how well the film was actually put together. For a group of independent filmmakers just getting their start, this film was much better than most trash that Hollywood tries passing off as horror these days. “The Tenant” isn’t a straight up horror film. In fact it is more of a comedy and it all works. Dziak along with his co-star Rom Barkhordar, who plays the demon Rabisu, have great comedic timing together. The acting all around from the major characters to the minor characters far exceeded that of any expectations I may have had. The story wasn’t overly complicated and both the main story and the subplot with Tyler’s sister Amy were interesting, funny, and well thought out.

There are a lot of effects in this film. For me, they were almost Troma-like but some of them actually put Troma to shame. There is a mixture of classic make-up and visual effects that looked great with a pinch of CGI that worked, though I found it to be a bit distracting. That being no fault of their own since I tend to be distracted and bothered by CGI no matter how good or bad it may be. The films cinematography and editing are very strong and the film never drags for a moment. If I had one complaint, I noticed that in several spots the audio was either out of synch or they had some audio issues.

Having worked, in different capacities, on short films, I know how difficult it is to get the audio just right. Hell, for all I know it was a DVD mastering issue. It wasn’t distracting in any shape, just something I noticed a few times. The past year I have watched dozens of independent horror films and there has been very few standouts.

Most of them have already been erased from memory but I have to say that “The Landlord” had several key moments that stood out or made me laugh. I love when I am surprised by these little movies that make me excited about indy films again. Writer/director Emil Hyde has to be credited for running such a tight ship and creating an element of mischief and horror in the same film. There is a pinch of “Evil Dead” with a sprinkle of “Beetlejuice” thrown into the mix. I really hope that this group goes on to do more in the same vein. This was a lot of fun and to tell you the truth, I almost didn’t bother with the film. I’ve had many filmmakers try peddling their films to me and I honestly hadn’t seen one that I enjoyed, that is until “The Landlord”. Check this one out at www.thelandlordmovie.com for more information.