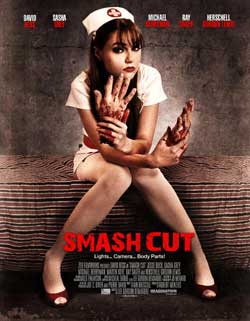 After his latest film is met with horrible reviews, Able Whitman sets out to prove the critics wrong by finding inspiration in his cast and crew. Sometimes great art requires great sacrifice- and the director always gets final cut!

When filmmakers are out there trying to make the big bucks, one will do whatever it takes to make their movie appeal to skeptical audience. Especially is the case in the horror industry with low budget independent films not making near as much money as big-scale Hollywood productions. This theme is brought up throughout Lee Demarbe’s Smash Cut, where a low budget filmmaker must learn how to impress an audience with his horror movies without having the financial support that movie-makers desire.

Smash Cut has a 70’s retro theme going through it, even though the movie looks to be shot in present day times. AbleWhitman(David Hess) is shown at the movie premiere of his newest movie about a clown puppet killing a scan’tily clad psychiatrist. The viewers of the movie make remarks about how much the movie sucks, and how everything looks fake that bothers Whitman in the background. Whitman is haunted by the snide remarks of the crowd, but after alcohol and inspiration through burning army men, he leaves the strip bar to go on a ride with his favorite girl Gigi (Jennilee Murray). After Whitman’s mind is taking off driving by Gigi’s declaration of real feelings for him, he crashes his car instantly killing Gigi. Distraught and confused, Whitman then gets a new idea that possibly her body could be used as a prop for his movie.

After shooting his first scene with Gigi’s corpse, his crew members start to commend him on how realistic the supposed prop of a body is, which gives Whitman the idea that he needs more real blood and bodies instead of fake props. He tries to drain himself of blood to use for the movie, but ends up passing out after he takes too much. Whitman then decides that the only way to get realistic bodies for his movie is to go on a killing spree from critics that gave him bad reviews to fellow cast and crew members.

Whitman’s spree gets intervened by Gigi’s sister, the beautiful television reporter April Carson(Sasha Grey). Her mission to find her sister speeds up when she hires Isaac Beaumonde(Jesse Buck), an eccentric private detective who will do anything to get television coverage of his cases. April and Beaumonde devise a plan for her to audition to be in one of Whitman’s works when they declare him one of the main suspects in Gigi’s death. There is a comical and disturbing scene in which April is auditioning in front of Whitman by reciting lines from Hamlet. Whitman hands April her sister’s decomposing head as a prop, and April kisses the head at the end of her lines. Whitman’s killings continue as one by one members of his crew are being picked off, and more real blood and body parts are demanded by his conscience.

The film was full of horror film cameos; such as Michael Berryman wearing a black haired curly wig playing Whitman’s boss Philip Farmsworth, Jr. Also, Herschell Gordon Lewis makes an appearance as Fred Sandy. The director Lee Demarbe made it very clear that this move was dedicated to Lewis, and the viewer can see the ties with the 70’s themes and over the top gore elements. The movie score also made was well done, tying ends with the great Lewis films of the past. This movie is blood-soaked and filled with body parts that shower down in numbers, which is a must have for anyone with a passion for gore.

With a psychotic director that will do anything for moviegoers to like his movies, Lee Demarbe’s Smash Cut leaves you wondering: what will Whitman do next? In an industry where remakes usually deem better, finding a new and fresh way to stay in competition with big budget Hollywood flicks seems something risking everything for.