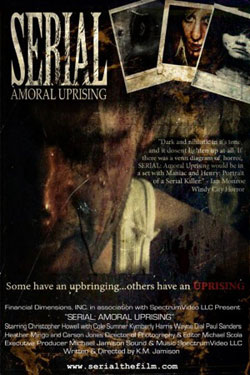 Who is Trenton Bracks? Well, What’s there to say? Loyal and honest, he’s a credit to southern gentlemen. Pleasant, carefree, and highly refined. He’s got what it takes to be a model citizen. He’s got looks and charm, a real lady-killer. Trenton seems to have a good head on his shoulders, and one in his hands, and one in the basement.

QUICK FIX:
In this 55-minute short from the Windy City area, we get a quick chronicling of some of the days in a young boy’s life and on into manhood, from the years 1976 to 1995. Plus, we get to go deep (or as deep as time will allow, anyway) into his mind and see what made young Trenton Bracks tick. Or better yet and more to the point, what turned a nice, young, mannerly boy who only wanted to make his Mama happy into a violent, bloodthirsty, ex-con serial killer. Apparently, Trenton’s mom never bothered to watch Psycho, or she would have known what happens when a mother pushes her boy too far. Some folks just never learn…

RAMBLINGS:
All that Trenton Bracks ever wanted to do was please his Mama. That’s not too much to ask, right? After all, that’s pretty much any adolescent boy’s dream – as long as Mama’s happy and proud of her baby boy, all is right with the world. But what if your Mama is a coked-up, white trash, sh*t-talking, crackwhore that does nothing but berate you every single possible second of every day that she gets the chance? What if nothing you ever did, said, ate, or wore was ever good enough for her? What if she called you a “stupid, worthless, no-good, goddamn freeloadin’ son of a bitch, big-mouthed, know-it-all-asshole jerk”, and routinely put the whoopin’ on you whenever you got within arms reach? Well, chances are, you get a boy that grows up to have an intense hatred of women who will use them for whatever he deems necessary at the time before carving them up like a Christmas ham.

*DISCLAIMER – I am NOT, by any means, a clinically trained psychologist. But I have seen them on TV.*

Sometimes, just sometimes, it’s not the “evil” father or stepfather that pushes an impressionable young mind into being a heartless killer who only sees their parental figure in whoever he or she is choking, stabbing, carving, shooting, whatever. In fact, when the killer is a male, it does in fact, from my own plethora of experience with books, TV, movies, etc, that it was his mommy that made him do it…or at least pushed him into it. I’m just saying…take for example the totally unnecessary remake of Halloween – if we were going to throw the whole “born evil and consumed by blackness” theory about the original Michael Myers right out the f*cking window and instead make it a white trash parental figure that drove him to be an unstoppable immortal killer, it would have been much easier to believe and in fact accept (for me anyway), if it was in fact his mom who was an abusive bitch and not the mom’s boyfriend, although William Forsythe did in fact rule in that role.

But back on topic – the lovely Ms. Harris was over the top in perfect Shatner-esque/Bette Davis-esque (that IS a compliment) form as the cokehead bitch of a mom. She’s gorgeous, she’s talented, and I’d love to see more of her soon. Christopher Howell as the adult Trenton hit all the right nerves as the sadistically charming gentleman slasher. Wayne Dial as the supportive father that loved his son but took a stand just a little too late was also entertaining.

Writer/director Jamison took what was obviously a very small budget to work with and crafted a very entertaining story and packed it all into a short time frame. It has the obvious nods to other stories that came before it; and a gritty, dirty, graphically realistic feel to it in the tradition of the classic HENRY: PORTRAIT OF A SERIAL KILLER, or J. Michael Lewis’ A THOUSAND WORDS series of short films out of the Columbus, Ohio area. Word has it that Jamison is also ass-deep in the middle of shooting a full-length version of SERIAL that fleshes out and further explores the exploits of our newest cinematic serial killer known as Trenton Bracks. I, for one, am anxiously awaiting this one.

LAST WORDS:
Does SERIAL have its flaws? Sure, what super-low-budget indie horror flick doesn’t? But as hard and scrutinizing as I can be on flicks, from Hollyweird blockbuster remakes down to the indie community level that I still consider myself to be a proud part of, I was still entertained, moved, and once or twice, even shocked. And as a life-long movie geek, that’s really all I can ask for in a flick.