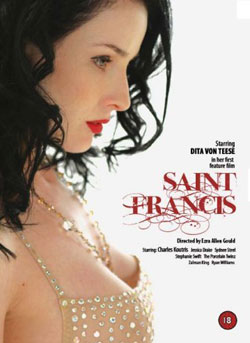 Francis, the son of a corrupt TV preacher, tumbles down a hallucinatory rabbit-hole of sex, drugs, aliens, fratricide, and planetary apocalypse in this twisted take on the life of Saint Francis.

Sexy Dita Von Teese makes her film debut in this horror film that combines equal parts terror and sex. Francis is haunted by thoughts that the devil will steal the soul of his sexy sister (Von Teese), who hasn’t exactly been an angel. You can rest assured that in Saint Francis, there’s plenty of seduction and sin to go around.

The film opens with Francis Bernard lying on an operating table as a mysterious surgical team fight to save his life. As he sways in and out of consciousness, he remembers, or imagines, a morbid tale. Twenty-seven years ago, when Francis was six years old, he witnessed in horror, his mother committing suicide by putting the barrel of a gun in her mouth. Francis also recalls his Father’s rise to prominence as an egomaniac preacher selling spiritual salvation through television. As Francis’ operation continues, his dreams reveal more clues as to his real condition.

We soon find out that Francis is a thug. He is a liar, junky and a thief. Hell, that’s almost everyone I know. But Francis’ drug use and sleep deprivation is causing difficulty in separating fact from fiction. It appears that when Francis has visions from the real and the imagined, he views the past in color; and it is filled with terrifying image from his tormented life.

Will the images and sounds of his mother’s death terrorize Francis, threatening to drive him to the same tragic destiny?

As the story unfolds, we fast forward 27 years to see what the family has become. Francis’ father, Dr.. P. Bernard, is the leader of The Church of Forever, a cult that uses late night television evangelism to spread a gospel of science fiction. And it appears that Francis’ siblings have gotten over their heads.

In a cocaine-fuelled haze, a series of events unfold over one tortuous night involving Francis’ sister Soul (a Hollywood madam), who brokers prostitutes to dedicated church members, to include her Father, and brother Sid (a sleazy wheeler-dealer) who are both high-flying figures in the Los Angeles underworld. Sid, Francis’ baby brother, has taken over the drug business that Francis left behind only to find himself deeply in debt to a shadowy underworld.

Sparred on even further by threatening phone calls from a character calling himself ‘The Sniper’ and strange television broadcasts depicting alien abductions, Francis’ psyche begins to unravel as his disturbed mind can no longer distinguish between fantasy and reality. Francis soon tumbles down a hallucinatory rabbit-hole of sex, drugs, aliens, fratricide, and planetary apocalypse in a twisted take on the life of Saint Francis.

Saint Francis is a shot-on-video feature that earns admiration in ambition rather than its execution but nonetheless does possess a distinctive rough charm all of its own. The story unfolds against the underbelly of an excessive lifestyle and it reflects this seamy milieu by peppering the narrative with nervy drug dependency, sex-for-money, and power struggles within both the internal family dynamic, and the external criminal community. With the dialogue mostly comprising of nonsensical junkie speak, ball-breaking machismo and self-serving evangelist preaching, plus a gaudy montage of imagery from security cameras, television screens and distortion filters, there is little that is naturalistic about Saint Francis: It absorbs you into a narrative that is infected by the drug-addled mind of its lead character.

Although Saint Francis may be a bit raw, it is still an effective picture in its own right and makes a welcome DVD release from Redemption Films. 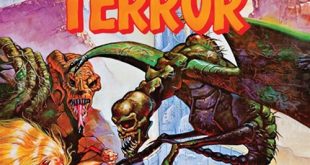