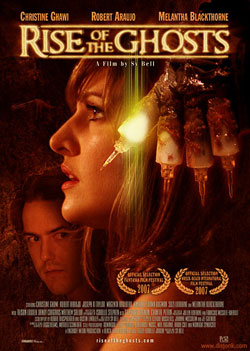 A group of friends venture in a school for girls which has the reputation of having a haunted sublevel basement. Rumors say that the former nurse of the school used that basement for horrible experiments on the schoolgirls, abusing and killing them. Soon enough, they are to discover that the rumors are not only true, but also that the souls of the girls remain trapped in the basement, tormented by an evil, supernatural being.

Some films, though they lack in budget, are high in ambition. They strive to rise above their limitations, whether it be financial, lack of experience, etc., they try to be the best they can be. “Rise of the Ghosts” falls into this category. Plenty of time is spent developing a story and making a film that the filmmakers wanted to make. It is hard to bash a film for its’ shortcomings when it tries so hard to be something special. It may not exactly be that film but there are some incredibly talented people working in front of and behind the camera on this one.

A group of friends (go figure) venture to an abandoned girls school, a school that was rumored to have a nurse that used the school’s basement as a torture chamber to torment and kill the young nubile school girls. To the friends, it is nothing but a rumor, but as they make their way deeper into the school they discover that the stories are not only true, the spirits of the tortured school girls still reside within the basement and that the evil nurse may still be hiding in the wings waiting to claim more souls for her own twisted needs.

This is the first film I have watched in a long time that tried to combine computer generated effects with a more classical approach. There were plenty of instances where different lighting techniques were used to generate a scare or to give that ghostly appearance to one of the school girls.

It didn’t always work but I admire the fact that it was used and it was fun to see. The CGI, as is almost always the case with a film of this type of budget, looked horrible. I was much more impressed with the practical, in camera type of effects.

The films story, as I understood it when I first heard a description, was about a nurse torturing young coeds at an all girl school. You can only imagine what was going through my head, they could have easily gone that route but they chose not to. While I still would like to so the movie I was picturing in my head, this one served itself well. Though a bit generic, it worked, with a nice little twist at the end that I saw coming, but had allowed it to slip my mind.

For me, the real discovery here is Christine Ghawi. She gave so much life to her character Sarah, that never for a moment did I doubt her sincerity or did I question her actions. Her motivation and her decisions as a character felt real and human to me. It was a shame that her co-stars, at least for me, paled in comparison. They all tried and did their best but I really felt for Sarah. Now it is rare to find such a good actress in a film like this and I sincerely hope that I have not seen the last of her.

I can’t help but to enjoy a film like this. It had the look of a mid-80’s DTV horror film, the kind of film you rented on VHS mostly because the cover art looked pretty cool. “Rise of the Ghosts” is far from a perfect film, there were plenty of flaws, but who really cares. Director Sv Bell obviously had the passion and drive to see his vision through to the end and that is what’s important. A filmmaker with drive will grow with each film and would watch another film of his. My main gripe, just a personal gripe, is that I hate cheap CGI. I didn’t like it in this film but if that was the most practical way for them to do it then so be it. If you need one reason to watch this film, it’s Christine Ghawi. Her performance starts out slow but by the end she grows into a full blown heroine. Check it out 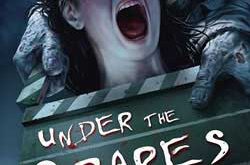