Director Patrick Hasson has a dream, and it is a unique one. His dream is to create a horror film centered around the evil that lurks inside storage sheds. Enter the world of Hasson’s low-budget independent horror film titled BLOOD SHED. No, it’s not a film about hoarding knickknacks or husbands hiding their sports memorabilia collections from their wives, there is an unspeakable evil lurking behind those cheaply constructed walls. The premise is fairly simple, a homeless man named Gabriel becomes the willing study subject for an indie-documentary about squatters living out of their storage units. What his camera captures is a supernatural creature driven to procreate, and what’s worse, it also carries a bizarre connection to Gabriel.

Synopsis:
“When GABRIEL, an unemployed loner living in his car, gets an opportunity to make some quick cash, he takes it. The only catch–he’s now the subject of an indie-documentary about homelessness in LA. After agreeing with the film’s DIRECTOR to go on camera, Gabriel receives a package at his PO Box. It’s a key to a storage shed. They document as Gabriel goes to the storage shed and opens it. Inside lay artifacts from his biological parents, with clues to their mysterious disappearance. After Gabriel decides to crash in the shed for the night, he agrees to take the Director’s video camera and document his nightly findings.

Gabriel soon discovers a small community of squatters living within the claustrophobic shed spaces of the massive complex. A mother and her teenage son (TRACE). An old man. A prostitute (DEVON), a meth-head (LUCY), and several other bizarre characters. He also has a run-in with the crass Armenian manager (ARSEN), who is convinced that people are living in their sheds.

Through carefully placed visual teases, we soon discover that a shape-shifting, she-creature lives amongst this dark maze of makeshift dwellings, a sinister purpose arising as she senses the arrival of the facility’s newest resident, Gabriel.

As Gabriel shacks up in the dingy storage shed, he rummages through its stored contents, looking for clues to his biological history, finding only a sad story that seems to lead ultimately to his mother’s (JEZEBEL) murder, and his own abandonment. His soul torn, Gabriel wanders the halls of the large building, coming across the mute Old Man, who warns him to leave. Unbeknownst to Gabriel and the rest, Arsen has locked them in for the night to teach them the ultimate lesson.

The twisting hallways and the tunnels that run below provide a grim setting for the horrid events that will come to pass. A supernatural creature with a thirst for blood and a demented desire to procreate will turn this place into a labyrinth of death, connected in a surprising and bizarre way to Gabriel, a mystery that unfolds as the blood begins to fly.

We find ourselves trapped in this story, laced with dark biblical implications and Mexican Santeria. The bloodshed and tension reach stomach-churning heights as we discover the origins of the creature and the horrific tie between Gabriel and the she-beast that stalks him through the darkness. With an ending certain to haunt your dreams for years to come, BLOOD SHED is a creative and tense romp into the horror genre, reminiscent of some of the greatest horror films ever made (The Texas Chainsaw Massacre, Paranormal Activity, The Last Broadcast).”

Hasson is currently seeking funding to complete this project and if you pledge $25 or more you can score a Special-Edition DVD of BLOOD SHED signed by Patrick Hasson, and Brandon Ratcliff. You will also get your name listed in the film credits. Higher donations can land donators everything from movie props to an Executive Producers credit complete with the creation of a profile on IMDB. Those interested in donating can head over here: www.kickstarter.com/projects/bloodshed/blood-shed-a-feature-length-horror-film

Hasson’s script for BLOOD SHED was a Quarterfinalist in the 2010 Nicholl Fellowship for Screenwriting. Learn more about the film at the official website: www.bloodshedthemovie.com/ 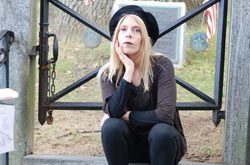