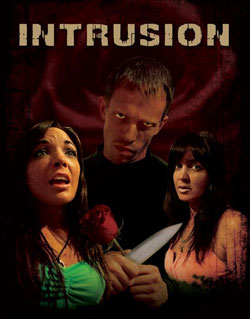 In the film “Intrusion”, Holly Jensen (Kate Stanley) is about to play a game, one she can’t afford to lose. A simple night of fun turns into a nightmare after a series of bodies begin to pile up. An innocent prank turns into a game of cat and mouse as the killer sets his sights on Holly. Now, it’s a bloody battle of wits and kill or be killed strategy that will decide who will be left standing alive.

Crimes of passion can lead to complete mental breakdown, as in the case of Dru Pfieffer’s film Intrusion. When a love hungry girl crosses paths with a psycho killer, she must find a way to escape the hands of the death obsessed villain, and save her friends and lover in the midst of battle.

Intrusion begins with the main protagonist, Holly Jensen(Kate Stanley), reminiscing in her photo album. While this happens, we are first introduced to the psycho killer, Raymond Hummel(Lee Haycraft), dressed in a suit walking to his home carrying a dozen roses and a bottle of champagne. Also, another scene is shown of a woman mounting a man in an intense sexual experience. Back to Holly, she is next shown sitting with her friend, Kali(Teresa Lawrence.) Kali convinces Holly to play a game called “wrong number,” and Holly is mortified when the man she chose to call had caller ID. Little does she know, the man on the other end is Raymond, who just killed his girlfriend in a crime of passion.

Throughout the movie, Kali is the good, supportive friend that tries to help Holly find a new boyfriend and father to her child. Holly is impressed by Kali’s relationship with Tom(Mark Spurgeon), and haunted by her past breakup with Peter(Kyle Cates.) Raymond continues to play games with Holly, by calling her at home and while she is at work. Raymond visits Holly’s home while she is at work, and becomes a full-fledged stalker, following her while she is on jogs and making her fear being alone. Raymond also continues his killing spree, preying on happy couples, and destroying the romance that he lost from his own relationship.

Tom and Kali hold a party at Holly’s place, and invite everyone, including Holly’s ex Peter, and her ex-best friend, which causes internal angst to come out in front of Kali. Her ex-best friend tries to convince Holly that she is hurt that their relationship was ruined, but Holly hides from her speaking. She runs into Peter, and Peter tries to convince Holly that he still has feelings for her. Holly falls for Peter once more, and is interrupted when Kali comes in the kitchen. She immediately declines Peter’s gestures, and runs into the bathroom.

Raymond systematically hunts down another couple, and then starts to prey on the ones closest to Holly. When Holly refuses Tom and Kali’s invitation to leave her home, and accepts an invitation to go on a date with Peter, she feels serenity while being accompanied by her once again best friend. At night, Kali finds a rose on her door, and is hunted down by the killer along with her husband. When Peter comes over, he too is hunted down by the psychotic Raymond. When back story plays over in Raymond’s mind of him killing his girlfriend, he comes after his last target of Holly. Holly must strive to save her own life, along with her friends in attempt to save her tattered life.

There is plenty of killing scenes that keep the flow of the movie at an interesting pace, when back story of Holly’s failed relationship with Peter take the story to the past. The element of Holly having a child bothered me, since it was mentioned but in no way was a child presented throughout the movie. She in no way looked pregnant, but did not drink any alcohol throughout the movie.

The movie did not have a sense of setting, but some camera shots of Holly’s trailer and the outside of some houses. Raymond’s deliverance of lines bothered me at some points, with a mechanical undertone in his talking that hindered his ability to portray a deranged, psycho killer.
Dru Pfeiffer’s Intrusion is the classic tale of being in the wrong place in the wrong time, by Holly accidentally picking the wrong person to call at the wrong time after a crime of passion. Her inner strength comes out, when she is chose to face the deranged psychopath, and learn a new lesson in love that she had not before.