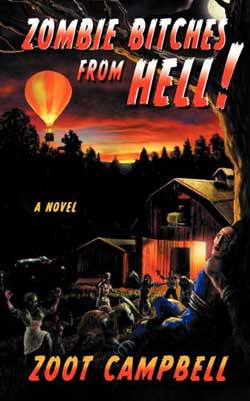 Let’s try an experiment.
“So I was reading Zoot Campbell’s Zombie Bitches from Hell the other day.”
What kind of reaction do those words evoke in you? Are you offended by the book’s title or by any of the words contained therein? If so, you should, without question, pass on this one, ‘cause it doesn’t exactly increase in political correctness after the title page. If, on the other hand, the title makes you think “Cool!” or “Can I borrow it?” or even “Zombie bitches from Hell, huh? Yeah, I know a few of those,” then by all means, give it a read.

In this particular vision of the zombie apocalypse, only women are susceptible to the GaGa infection. (No, I’m not going to explain the name. You’ll have to find out for yourself.) Campbell’s characters do spend a little time speculating as to the science behind the gender-specific infection, but the cause is less important than the result: a bunch of crazed, ravenous females intent on devouring the half of humanity unfortunate (in this particular case) enough to be saddled with Y chromosomes.

The basic plotline is one with which fans of zombie stories will be familiar: people die and start misbehaving, and our heroes strike out to find their loved ones, who are hopefully still human. Campbell’s protagonist, Kent, sets off on a cross-country quest to reunite with his girlfriend, but he does it in one of the more creative vehicles of zombie evasion I’ve encountered in a work of fiction: a hot air balloon. Along the way, he and his ever-shifting crew of companions encounter friends, foes, and some very strange permutations of the GaGa infection.

Now you’re probably thinking “Hey, that doesn’t sound so bad.” In fact, those among you who perked up at my initial intimation of offensive material (I know you’re out there, and you know who you are!) are probably thinking it sounds downright tame. Never fear, you fabulous freaks; this floating road trip turns outright foul with surprising rapidity. And it’s not just your typical zombie gross-out kind of foul either.

Don’t get me wrong; there’s enough ravenous-zombie-induced gore to appease even the most depraved horror fan’s hunger for splatter. But the more disturbing elements of this tale are not zombie related at all. With the laws of both man and nature breaking down, those who survive are free—and willing—to commit horrific acts against the perceived enemy. Along his journey, Kent encounters several groups of survivors who have sunk to depths that make The Lord of the Flies look like a delightful Sunday picnic. Readers who can stomach the graphic atrocities will be forced to face the classic question of “What if we’re the real monsters?” Sure, it’s been posed before, but never quite like this. And besides, it’s a question that bears repeated contemplation. After all, as a species, we’re a bunch of scary bitches (and sons thereof)!
My one complaint is that Zombie Bitches from Hell could have used an extra editorial run-through. The informal tone doesn’t bother me. Who has time to worry about “I” versus “me” or “who” versus “whom” when you’re on the run from a bunch of crazed dead chicks hungering after your tender bits? I just wish the pesky typos and punctuation issues had been cleaned up a bit more. It would have made for a smoother ride through this demented rollercoaster of a book. Still, a few bumps hardly derail the gloriously gory thrill ride.

Just don’t read it while eating. Trust me.