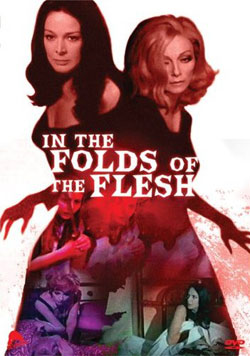 A revived classic from the Giallo era comes to you from Severin Films. The film “In the Folds of Flesh” is hard to describe. It’s even harder to follow. Though it’s appears to combine several controversial issues and packs a wallop in a time where films like these were largely more underground than seen in theaters. It’s European exploitation with a touch of psychedelics thrown in. The sleeze is in tact and even with its dated look it tends to draw you into its weirdly hypnotic world.

Directed by Sergio Bergonzelli it starts off with a swirling array of psychedelic paints overlaid with poetic phrases. Not your usual title sequence but fitting for the time I suppose. We are introduced to a odd wealthy family consisting of Lucille (Eleonora Rossi Drago ) her daughter Ester and her son Pascal who live in a offshore castle. The son and daughter are a disturbing bunch on screen with a frequent weird display of incest that is topped with a touch of pretentious snobbery. The incest scenes are pretty uninspiring as he licks her feet and engages in French kissing spats with no emotion what so ever. The distant look in the mothers eyes is equally disturbing as she seems to portray complete ignorance to the displays of affection.

The whole family seems to be killers who have no problem stabbing guests, lovers, or drop in relatives. Often we are granted a gratuitous decapitation just to sell the idea. They keep vultures as pets, act more like roommates than family and seem to have no trouble with there ritual of soaking the bodies in acid baths to dispose of freshly killed corpses. It would appear like the film is action packed, but somehow they elements are acted like business as usual which tend to drag the film without much connection between actors. We are never really given much information as to why they keep killing there drop ins, besides the suggestion that Ester is just plain nuts due to a past experience where she thought her father raped her. It turns out the raper was her mother’s lover who the daughter blocked out and assumed it was her father.

In the inset of the film, an escaped killer is found on the property per local police, who returns 13 years later to black mail the family with the notion being paid off to not disclose his knowledge on them burying the father in the back yard. He holds them to gun point only after raping the mother and daughter to his amusement. Not a problem for the twisted 3 as they kill him off with a cyanide bath shortly after. Just another week of in the lives of the 3. The father actually faked his death to escape the wrath of criminal involvement and disappeared. Though I must say even this issue is a little blurry to sort out.

Most of the time Ester (Pier Angeli) looks like she is in a daze, which makes sense with her drug problem that caused an overdose a year later (in real life). Her disconnection is often eerie where she looks right thru the screen, her co-actors and the events taking place. I swear towards the end of the film she became almost mannekin looking at times. The fake wig she wears thoughout sort of attributes to that fact.

One of the elements that throw things off, is the disconnect that actors seem to have with some of there lines. Almost to the point where they don’t even understand the script they I’ve been given. With this apparent flaw the film comes across very surreal and distant at times as one scene blurs into the next.

Called a “must have” bizarre giallo, I really think this is more of a collectors treasure than a consumer treasure. Yes it is odd with sinister elements but nothing we haven’t seen in cinema today. The difference is that the Italian 1970 feel is way more vague and offbeat from a story plot understanding than what we are used to seeing. Severin Films did an excellent job at restoration with highly vivid colors and intact sound transfer even though it’s in mono. The audio English overdubs are apparent but still work for the film for cult lovers of the giallo film era.