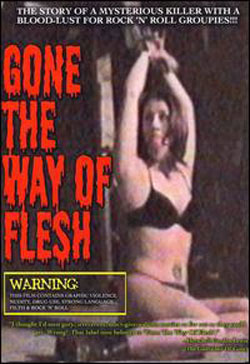 This is the story of a mysterious killer with a blood-lust for rock’n’roll groupies. A local town is outraged as under-aged female fans start turning up in pieces after live performances by The Jason Martinko Revue. It is up to one detective to rid his city of this traveling road show of filth, as he struggles to overcome numerous addictions. The soundtrack to this outrageous, gory & tasteless film is provided by The Jason Martinko Revue. So if you like nudity, drugs, violence, filth & rock’n’roll you won’t want to miss…

“yunno , that Casey got murdered last night?…who gives a %$%*@, that bitch didn’t even buy the bands album”- Now that’s funny stuff right there. “Gone the way of the Flesh” an low budget independent release from cut and run productions is a combination of cheap filmic gulash to the point of being entertaining for all the wrong reasons. The film is based simply around murder, rock and rock and some nice gratuitous nude scenes for kicks. All the workings of a masterpiece! (meant sarcastically) Local band “The Jason Matinko Revue” whom if you forget the name will be reminded several times thoughout the film has been inundated with a serious of murders perpetuated the nights and locations of their performances. Our first murder comes at you from the get go…. add 1 part hot chick and 2 parts smashed face against mirror and you’ve got your self a winner.

Films like this I hope understand the paradox they create. By filming in SD with basic video cam equipment, cheesy lines, next door neighbor acting and average camera moves….it actually creates something more entertaining than probably expected. The home movie video look , with forced acting and some aggressive balls out kills presents somewhat of a pretty gruesome and funny type of film. Hopefully intended that way! Wigs half on, fake bar fights, obnoxious drunks overacting being obnoxious.,…this to me is killer sh*t.

In one scene, we cut from a pole dancer to a conversation in progress as the dancer continues in the background. Now I don’t know about you but I missed the lines entirely still glued to the background scenery. In other scenes it appears the filmmakers just randomly approached bar and street people for commentaries about the towns killings. Not too shabby, no need for a script, just use the local night owls for off the cuff footage. We also cut into a pseudo music video half way through, giving more props to the real focus of this film……The Jason Martinko Revue. GTWOTF also contains the most unrealistically unconvincing killing scene I’ve ever seen. A victim hanging form a meat hook is dismembered and grinded up up piece by piece. Though the victim hardly screams and the pieces are plastic props without much to hide that fact. So take it for what its worth …cheesy bad filmmaking or just laughable footage that provides a night of entertainment.

Now in fairness of reviewing properly for myth readers, if you can’t handle home video look films, which are all to common these days…then stay away from GTWOTF . If you don’t mind and can take it all with a grain of salt that is part of the indirect charm, your gonna love it. Low budget releases for me fail when they try too hard to overcome what they are. This film doesn’t try too hard and because it, makes it all that much more enjoyable.

Major disappointment thought ….spoiler coming! The film stops after 55 minutes. Which at first I thought was a DVD defect. In fact there really is no ending. The killer gets caught, stabs the investigator and walks off …END. Well this is the ending, unfortunately Which at 55 minutes is missing an ending and about 20-30 minutes of material. Something more to laugh at I guess, just know I warned you first. I couldn’t help wonder if after that scene they just threw there hands up and went….”this works for me, lets go grab a beer”.

Upon finishing the film, I browsed thru the extras in which they did reveal that the film was in essence a band promotional tool to market the band more. Now I get it. It was also written, directed, produced and scored by the band. Give it awhirl just for the hot girls who appear from time to time on screen, most of which are strippers. Let this film be an inspiration to filmmakers that anyone can make a film nowdays…just approach them on the levels they dish out and you should be fine. Do I expect more form Cut and Run? Probably not likely, I think it was a just a fun project they had time for between gigs…… Thanx for making me smile though!!