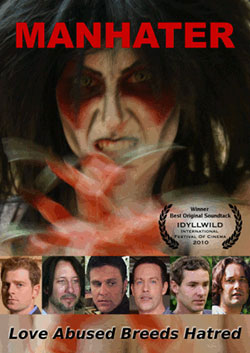 Vonda Madding has a history of bad relationships with men. The last man she married abused her and that was the last straw–she swore all men were scum. But what can she do? Eileen Trost has the answer–a witch’s potion to free Vonda of her hateful thoughts and make her forget them once and for all. Suddenly her ex-boyfriends are being murdered and the police’s only suspect is Vonda. But they don’t know about Enyo, and they won’t believe what is really happening…This is Manhater–an indie horror/thriller that strives to reach beyond the traditional genre and deliver something one step better–a movie with a good, unique story.

Revenge is every girl’s dream after an ex-boyfriend treated them wrong. When temptation is there, the urge is difficult to overcome, and our human needs are fulfilled when our pain is transferred onto someone else. This is the case in Anthony Doublin‘s “Manhater,” when a girl that has a history of bad relationships is given the upper hand when a demon is summoned to eliminate the men who broke her heart in the past.

Vonda Madding (emelle) is a love hungry young woman that has a problem finding the right man. Her latest boyfriend, Bruce(John Henry), gets his way with Vonda, and is a complete d*ck to her. Luckily, Vonda’s good friend Kelly Rubin(Techeira Rubin) convinces her to go to a holistic witch that can help her with her man problems. The witch, Eileen Trost(Alessandra Assaf), has a talk with Vonda, saying that she has the cure all potion for her troubles. Vonda is hesitant about the potion, but ends up chugging it down, and gets confused when nothing seems to happen. Suddenly, she falls to the ground as the elixir hits her hard. She sees all her ex’s in her head, and sees a demon woman painted head to toe in white and black paint. She shakes the bad visions off as nothing.

The demon, Enyo(Ariel X), is in top physical beauty besides the white and black body pant from head to toe. The only thing she wears in a pair of underwear and long, black fingernails that are used to claw her victims. Enyo starts targeting Vonda’s ex’s immediately, using different ways of murdering them from clawing them to shreds with her claws to other unspeakable acts. Enyo is able to morph into a seductress in a red dress to camouflage her demonic self. When things get rough, the dashing detective Tyce(Brendan Connor), enters the picture and vows to woo Vonda while solving the mystery of why Vonda’s ex’s are being picked off for only one reason of treating Vonda like trash.

While the killings are happening, Vonda’s current boyfriend Bruce starts to panic as his life is on the line due to this curse of a demonic revenge woman. Bruce finds help in the witch Eileen, which Vonda catches them rendezvousing together. The race to save Bruce’s life turns into tragedy, as this horrific demon continues on her quest to rid Vonda of her troublesome past loves.

As unrealistic as a demon being summoned to get revenge on ex’s sounds, the thought that it could happen makes “Manhater” a tale of interest to female horror viewers out there. The nude demon that was Ariel X provided eye candy for the male horror movie viewers out there, and had plenty of blood to please fans of blood and gore. I felt a lot of admiration for Ariel X going through the long hours of body paint and makeup for the movie, and spending most of them movie almost completely nude.

Anthony Doublin’s “Manhater” is a revenge horror flick that stands out besides the typical raging serial killer targeting young women (and sometimes men). A beautiful demon is summoned to pick of ex’s of a troubled female, and causes a town to go in an uproar. When the demon finishes her duties of erasing the men in Vonda’s past that caused her trouble, she is then released to do what she does best, murdering. 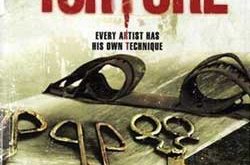