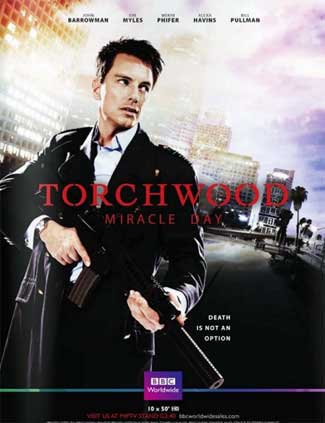 On July 8th, 2011 Torchwood will be kicking off their much anticipated fourth season. Fan favorites John Barrowman (Captain Jack) and Eve Myles (Gwen) will also be returning to the show and they will be joined by a few new faces including Mekhi Phfifer (8 MILE) and Alexa Havins. In the new season, Russell T. Davies told reporters that the people of the Earth will undergo a remarkable change, everyone on the planet will become immortal and no one will ever die. The Torchwood team is called in to find the source of the problem.

The result: a population boom, overnight. With all the extra people, resources are finite. It’s said that in four months’ time, the human race will cease to be viable. But this can’t be a natural event – someone’s got to be behind it. It’s a race against time as C.I.A. agent Rex Matheson investigates a global conspiracy.

The answers lie within an old, secret British institute. As Rex keeps asking “What is Torchwood?”, he’s drawn into a world of adventure, and a threat to change what it means to be human, forever.”