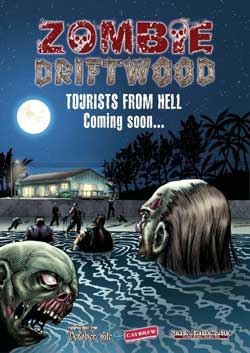 When a cruise ship full of Caribbean tourists turn into zombies two metal fans must battle against zombie Armageddon armed only with a baseball bat, booze…and bagpipes.

Zombies seem to be everywhere these days. Their proliferation seems to be unstoppable. Like the waves and waves of them that you might encounter in a horror movie, they just seem to keep on coming. Zombie Driftwood is yet another entry into the zombie genre, and it is by no means a horror movie in the traditional sense. This is a horror comedy that plays it straight for laughs, that is to say that there is not one tension filled moment in the entire film. Now that is not necessarily a bad thing per say, but when you present the film like this you better make sure that the comedy is pretty darn good.

And therein lies the problem. To be fair, there are some very funny scenes in the film that will give you a chuckle or two and there were some very good ideas in there as well, but as a whole the movie just doesn’t hold up. Some of the comedy ideas are overplayed again and again and I think that really hurts the film. One of those things where it was cute and funny the first time, but not the second, third, fourth, fifth and well, you get the idea.

Zombie Driftwood starts out with a newscast about a missing cruise ship. It sailed into the Bermuda Triangle and no one knows what happened to it. It’s as if the entire ship just disappeared off the face of the earth. Cut to a group of four friends on their way to a battle of the bands showdown being held at a local watering hole called the Driftwood Bar and Grill. Located on the very pretty Grand Cayman Islands, it is the perfect place for a vacation getaway and some rest and relaxation. Too bad the missing cruise ship happens to turn up on the shore.

We learn from the opening credit sequence that a mysterious green fog engulfed the cruise ship and turned everyone on board into zombies. So needless to say it is only a matter of time before they come ashore and start to eat and kill everything in their path. That is not good news for the people that are holed up at the Driftwood Bar and Grill. And once the zombies attack, it plays out the tried and true formula of zombies surrounding an enclosed area with a few frantic survivors tucked inside.

Zombie Driftwood is low budget but in actuality looks pretty good all things considered. The blood and gore, while not the greatest ever seen, is plentiful and not too shabby. The acting is what you would expect but you can certainly see they are trying their hardest. There is actually some pretty good dialogue, most of it coming from an old writer who likes to hang out at the bar.

One of the running gags in the film is that of the newscast being shown on the television. While the anchor is delivering the news, there are some clever little tidbits of small news stories that crawl along the bottom of the screen. Later, the zombies take over the station and start to cover the news themselves. This is one of those areas that I mentioned above. It’s cute the first time, but after awhile it just becomes too repetitive.

For you metal fans out there it seems like almost everyone in the film is wearing some type of concert tee shirt. The band October File even makes an appearance and they supply much of the soundtrack as well. The owner of the Driftwood Bar and Grill has a collection of classic concert tee shirts on display and it’s odd to say that just seeing them is one of the highlights of the film.

All in all I would say see this movie only once and only if you can catch it for free. I’m not even sure I would put it in the so bad it’s good category. If you are an absolute zombie fanatic then you will find some humor in all of the crazy proceedings, but for the casual zombie fan it just isn’t quite enough.