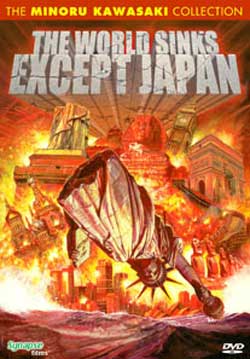 Synapse Films, enormous fans of the wondrous cinema of Japan, has looked upon its catalog and found a treasure trove of red sun delights. Overjoyed with this collection, Synapse Films has chosen to donate $1 of all sales of Japanese cinema ordered from synapse-films.com to Japan Society’s monumental Japan Earthquake Relief Fund during the month of April. Synapse Films’ relationship with Japan goes back for many years from the outrageous to the more outrageous. Tetsuro Takeuchi’s rock n’ roll zombie horror classic “Wild Zero,” rocks the mic, and the house, while Kazuo Gaira Komizu’s “Battle Girl: The Living Dead in Tokyo Bay” shows us a world where punk gangs rule the streets during a zombie invasion. From the surreal “Horrors of Malformed Men” to the sensual “Nikkatsu Roman P*rno Trailer Collection,” Synapse Films hopes to further bridge the divide between east and west and offer horror fans a chance to get away from overdone and dull Hollywood stereotypes for action-packed incredible Asian cinema. From pinky violence to manga adaptations, Synapse Films brings the land of the rising sun home to you.

With heads held high with our Japanese brethren we offer the uncomprising motto of a Japan forging on with Minoru Kawasaki’s epic The World Sinks Except Japan, a stunning tale of 2011 Japan when Earth’s foundations are shattered by the shifting of tectonic planets and most of Earth’s land mass has sunk beneath the surface of the ocean, and only Japan remains. High-flying kicks, groveling minions of the undead, and the supple radiance of young Japanese beauties flood our vaults. We invite you to explore and to do your part in helping Japan raise its head high. Join us!

The World Sinks Except Japan
$1 from the sale of each Japanese film in our catalog during the month of April will be donated to Japan Society’s Japan Earthquake Relief Fund.