“Murder is Like Sex” is a low budget independent release from HTM Films.

Usually in the case of low budget films, you always expect a potential drag to get from start to finish. Not that it should be that way, its just there are too many turds floating around the circuit. Is this a fair assumption? Yes, as these films are made on an idea, some equipment, and a simple desire to be filmmaker.

Was this the case here? I can tell you honestly that with MILS, I was pretty engaged from the start. This no frills production actually kept me pretty intertained with personable characters and an engaging storyline. Yep HTM pulled it off with very little and solid continuity that doesn’t bore or lead astray.

Narrated by the investigator of the case Keith Williams, the film flashbacks as he writes about the strange local event and murder case he had the experience of working on.

Our focal point Kevin Wright is a small town record store manager who spends most of his days hanging with his best friend and attending to his chronic masturbation issues, pretty regularly. Which actually was quite funny with the effort and frequency he kept to this daily ritual. To further the idea, he would spend extra money made from grocery gathering on lotion and beat off magazines. So how does this go from a series of jerk offs to an engaging story? Well, besides his humdrum of a life, he deals with locals who remember him as a loser from high school, a best friend who enlists him in outings to pick up chicks and some pretty lonely evening fantasizing about his dream girl.

Things begin to get odd when he is greeted by Lisa (Robyn Griggs), his new neighbor that he finds waiting at his door. Seductive, enigmatic and slightly insane, Lisa is invited in for small talk in which she leaves shortly after accusing Kevin of only wanting her for sex. A few days later reports of a brutal killing near his house are announced. The victim ends up being local girl Michelle Clark who Kevin had a falling out with recently. Things get more exciting as he becomes a murder suspect in the killing.

A new love interest begins when Kevin hooks up with his best friends cousin Lucy played by hottie Heather Summers. They hit it off instantly and things start to look up for Kevin.

Our blond vixen Lisa shows up again, this time in the woods while Lucy and Kevin investigate the scene of the crime. Lisa announces that she’s the killer and to prove it kills another local who just happened to be checking on the scene as well.

With all that’s going on, the film manages to keep you pretty glued to the story. Kevin is a likeable dork that you feel sorry for and glad to see him finally get a girl. Lucy is seductive in her own way with a sweet but expressive demeanor that is expressed mostly in facial reactions. Lisa just comes across as a pretentious crazy bitch that works quite well for the role. In fact in BTS viewing’s, you get the sense that alot of it not really acting but her true nature. She certainly is promoted as the star of the film, but to be honest I was more at home with the other actors involved while Robin came across with a certain white trashiness about her.

Murder is like sex is a highly recommended watch, that succeeds on original story telling, humor and likeable characters. For low budget releases, this one hits its marks and was a pleasure to watch. It’s not Hollywood but it’s still a decent flik. It also represents a low budget release done right.

Written and directed by Keith Boron, I think HTM films is on its way to a line of likeable movies that do what they intended to do, entertain. 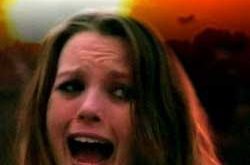