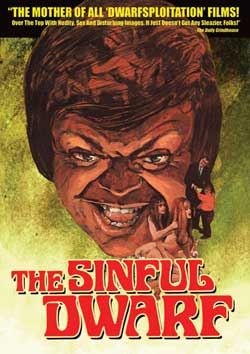 “A young bride,” promised the ads, “left alone to the lewd passions of an evil dwarf!” Severin Films is officially going to Hell – and taking you with them – with the first time ever in America DVD release of what may be the sleaziest film in EuroCult history: Diminutive former kiddie-show host Torben Bille – who looks disturbingly like Jack Black in a trash compactor – stars as the pint-sized pervert who imprisons drugged teenage sex slaves in the attic of his drunken mother’s decrepit rooming house… and that’s just the first ten minutes! The delicious Anne Sparrow – in her first and understandably only screen role – co-stars in this towering achievement in graphic depravity, now fully restored from a 35mm print discovered hidden in a janitor’s closet at the Danish Film Institute!

I swear if I see another Evil Dwarf movie! – Just kidding, this may be my first experience with a psychotic dwarf on screen and Severin films was happy to oblige. Now what can a dwarf be up to that’s so damn evil and sinful you ask? Well our dwarf Orlaf played by Torben Bille is a bit of an entrepreneur. He’s managed somehow to lure young nubile vixens up to his attic and enslave them as drugged up sex vixens. How you might ask? With his toys and fake puppies… Well we aren’t in Kansas anymore Dorothy as it’s unlikely to meet a young girl who will follow you up to your attic per a toy dog..and with a grinning weird little dwarf even! A few things passed though my mind. Who wrote the script for this and who said…we need to make this Dwarf film!

I guess there really is more attraction in the exploitation are than anything as the females stay pretty naked through most of the film. The star Anne Sparrow who plays Mary gets a sex scene within the first 10 minutes so its got that going for it. As its written on the box sleeve this was her only on screen appearance. Its a shame as she is one hot lady.

Is this a horror film? good question…. I think the little guy is pretty sinister in a nightmarish wizard of oz sort of way. The funny thing is how mildly these girls just except there fate and hang out in the locked attic without going off the deep end. Orlaf keeps business pretty steady as paying young men come up to enjoy the dwarf enslaved women he has on staff. Meanwhile his weird drunkard of a mother runs the boarding house downstairs and occasionally grants us viewers with a song and dance. Meanwhile Orlaf dwiddles with his toys and limps around with his sh*t eating grin. This is one whacked out family which is appropriate for a whacked out film. Now the mother seems to spend more time with her bottle of booze than anything else. but you are granted a interlude of her side job. She moonlights as a nightclub act which is beyond god awful as she spits out horrendous tunes for our viewing pleasure.

The premise revolves around a married couple Peter and Mary who just moved into town and is seeking wok. They take up residence at the dwarf house at least till Peter gets on his feet. Little did they know that a sex slave shop is being run by dwarf boy upstairs. The main source of sex slave drugs comes from a toy store owner named Santa. Santa swindles in drugs on the inside of teddy bears. Which of course Lila and Orlaf use quite often on there captives to keep them dumb and dorky. With all this going on it probably sounds pretty exciting. Well I have to say most of this drags by. Whatever clever idea was at the heart of this is surely overshadowed by a room full of naked chicks.

Each of them of course gets a bit of sex slaving by anxious paying customers and somehow they seem a bit too in to it to suggest that they are being raped. Orlaf makes sure they also get a daily does of injection to keep it status quo. Filmed in 1973, director Vidal Raski was probably trying to appease a certain cinema need at the time. My guess is this was one of those odd grind house deals that attracted viewers to it’s sexplotiaion aspects. I can’t say I’m a fan, but it was an unique piece of work that I’m sure you won’t forget. If you own alot of the Severin style films this one will of course fit nicely with the other odd pieces. Perfectly suited for that occasion that you announce “hey who wants to check out – Sinful Dwarf”?