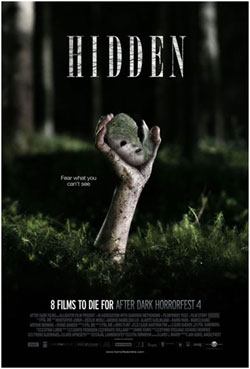 Some terrible things happened to Kai Koss when he was a child. Returning back home after twenty years so that he may bury his mother only begins to awaken the memory of some of these horrible things. Kai finds however that most of the small town is suspicious of his arrival, and most aren’t too happy about it. Worst of all Kai finds out a secret that his mother has kept hidden from the entire town.

Pal Oie’s 2009 film Skjult has recently been released here in America under the title of Hidden and it is being marketed as part of the fourth After Dark Horrorfest. I have seen a lot of the films released through the After Dark Horrorfest over the years and with the exception of a few I was hardly impressed so I was pleasantly surprised just from the start of Skjult.

Skjult starts by having a flashback sequence from 1989, in the sequence a boys hand is seen reaching out from under the ground grabbing for the freedom of fresh air. After we see such a sight we are treated to a shot of a well dressed young boy getting out of a car and walking to the side of the road in order to relieve himself. Pal then shows that the hand the viewer saw reaching for freedom earlier indeed does belong to a very young boy. The young boy appears to have been beaten and is barely clothed as he runs through the woodland around him constantly looking back in fear that something is following him. The boy continues to run until he gets to the road where the boy relieving himself is. The abused boy quickly darts across the street not paying attention to the oncoming traffic. This ends up causing a quick, yet rather nasty accident as a truck brushes against the car that is setting on the side of the road. The young boy who is relieving himself suddenly turns and sees the car that holds his parents burst into flames. Both of the young boys look on in horror at the events as they play out and then the credits sequence for the film begins.

When the credits are over we learn that a man named Kai Koss, or KK as he is frequently called in the film, has returned back to his small town in order to bury his mother. I should point out at this time that director Pal Oie has created a very creepy film and the cast of the film helps sell this. The cast of strange characters all handle their roles very well. Pal has also taken advantage of the sets of the film during the course of the movie the viewer is shown a creepy house, a strange looking hotel and a very beautiful waterfall. There are a lot of supporting characters throughout Skjult but the two main characters are Kai and a female police officer named Sara. Kai goes into the room where his mothers corpse is for identification and it is during this sequence that the viewer will quickly learn that Pal Oie also has quite a thing for jump scenes (there were a few that got me throughout the viewing of the film). After assuring that his mother is indeed dead (he breaks the corpses finger just to be on the safe side) he leaves the room and that is where he meets up with Sara. Sara informs Kai that his mother left no note or will of any kind so all of her possessions are now his, including the creepy house where she lived.

When Kai makes his way back to the house director Pal Oie has a heyday with jump scenes and creepy sequences involving things that really aren’t there. The house however is perfect for this as it is not kept in the cleanest state, there is stale food left on the tables and the bathtub is still full of murky water. The most disturbing however is the collection of dolls in various states of decomposition throughout the entire house, who wouldn’t have a heyday setting up scares with a set like that?

After a few creepy scenes, including one with a child’s rubber ball in which a hand reaches out of the darkness to grab onto Kai’s he decides that he is simply going to burn the house the ground. Sara happens to show up around this time and plays police officer and takes the cans of gas away from Kai. Kai then decides to go stay at the local hotel, yet another creepy location with yet another creepy character for the viewer to be introduced to.

I really don’t want to describe too much of what goes on in Skjult as this isn’t your typical hack and slash type of horror film. This is a film that dwells with the tortures that can develop inside of someone’s mind when they have been traumatized. Pal Oie really has a great eye for his sets and use of light and color, several of the scenes feel very claustrophobic which causes his jump scenes to work almost too well. I am not exaggerating there are really a lot of jump scenes scattered throughout the film; it gets to the point that some of them are just kind of silly.

There is somewhat of a body count in the film as we see several deaths however most of these deaths are kept off screen. Two deaths that are visible on screen however involve impalement and a man getting a splinter of wood shoved into his eye socket. Gore hounds however might find themselves bored with the film, but for those that enjoy a little drama and tension with their horror Skjult is definitely worth a look. 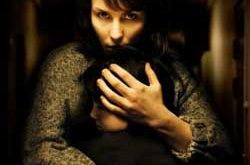