Home | ‘The Inheritance’ on Bluray – rituals, trances and demonic possessions!

‘The Inheritance’ on Bluray – rituals, trances and demonic possessions! 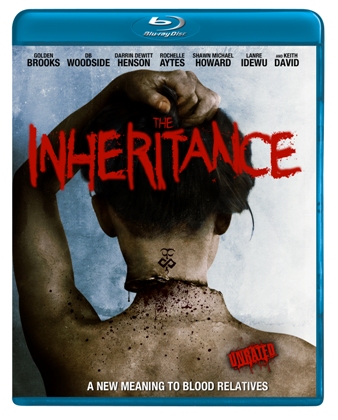 Stake Your Claim April 12th on Blu-ray™ and DVD

When five ambitious cousins gather at a family homestead to claim an inheritance, they are thrust into a terrifying world of rituals, trances and demonic possessions as they compete for their share of a mysterious family fortune in One Village Entertainment’s gothic thriller The Inheritance.

In the tradition of The Shining and Rosemary’s Baby, this chilling new horror film premieres on Blu-ray™ and DVD April 12, 2011 from Image Entertainment. Written and directed by award-winning filmmaker Robert O’hara and featuring an all-star cast including Golden Brooks (“Girlfriends”), two-time Emmy® Award-winner Keith David (Requiem for a Dream), DB Woodside (“24”), and Darrin Dewitt Henson (Stomp the Yard), The Inheritance delivers powerful performances, stunning imagery and heart-stopping twists that will leave audiences on the edge of their seats. SRP is $29.97 for the Blu-ray™ and $27.97 for the DVD. Pre-book is March 15th.

For cousins Karen (Brooks), Henry (Woodside), Tyrone (Henson), Lily (Rochelle Aytes, Tyler Perry’s Madea’s Family Reunion) and Simpson (Shawn Michael Howard, Cable Guy), the truth about their ancestral fortune has been buried for centuries, dating back to the time of slavery. Now, an invitation from the family’s commanding and enigmatic patriarch (David), along with a series of supernatural events and mysterious disappearances at a long-awaited family reunion, forces this once tight-knit family to discover how far they’re willing to go to obtain their precious inheritance. When Aunt Felicia (Adriane Lenox, The Blind Side) arrives in the middle of the night to deliver urgent news about the clan’s ties to the occult and the ominous events that lie ahead, Karen and her cousins must accept the truth of their destiny and either choose the sacrifices that must be made, or to turn their back on disturbing centuries-old customs and the wealth and privilege that come with them.

Image Entertainment, Inc. (OTCQB: DISK) is a leading independent licensee and distributor of entertainment programming in North America, with approximately 3,200 exclusive DVD titles and approximately 340 exclusive CD titles in domestic release and more than 450 programs internationally via sublicense agreements. For many of its titles, the Company has exclusive audio and broadcast rights, as well as digital download rights to over 2,100 video programs and approximately 400 audio titles containing more than 6,000 individual tracks. The Company is headquartered in Chatsworth, California. For more information about Image Entertainment, Inc., please go to www.image-entertainment.com.

About One Village Entertainment: