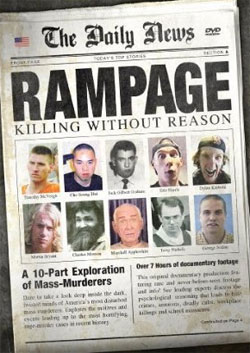 Dare to take a look deep inside the dark, twisted minds of America’s most disturbed mass murderers. This 10-part documentary series explores the motives and events leading up to the most horrifying rage-murder cases in recent history. This original documentary production features rare and never-before-seen footage and information. See leading experts discuss the psychological reasoning that leads to hate crimes, arsonists, deadly cults, workplace killings and school massacres.

Rampage – is a documentary series spread out over a series of focuses that target reality killing. The collection spans over 7 hours in this tidy pack that is well worth the small $15 charge. My guess is at some point you may also be able to pick it up at Walmart for half that price. Though don’t let the price fool ya. Its a package full of all kind of interesting footage, details, unseen footage and historical overviews of how generally messed up members of our society have become. I was hoping to find out more about where this 10 part series was coming off of though I’m assuming perhaps AMC or the History channel.

None the less, it’s an interesting enough series that I most likely would have caught it when it was live. The collection from Millcreek Entertainment is broken up into killing categories. Each is available to watch as an episode which generally lasts about 60 minutes each. Some of the categories include Cult Killings, Family Slaughters, Mass Murders, School Massacres, Political Killings, Hate Crimes and others. Each also focuses on the title contents giving pretty solid overview of the more noted cases.

For instance in Cult Killings, they analyze and review the Manson Murders, Heaven’s Gate, the Jones Town Massacre, and David Koresh’s cult organization…..the Branch Davidian religious sect. Points about the mistakes that were made, the factors involved and how we let the media probably catch more than they should of are discusses and how they fuel the psychosis of the cult leaders.

School killings are chronicled in discussion with the viral nature of all these situations inspiring more and catapulting a trend so to speak into action. The creators of this series did there homework even showing a number of real life clips of some of the profiles that I hadn’t seen before. Manson is analyzed more for his contribution to the cult murders than say a straight out serial killer as he is portrayed at times. Timothy McVeigh is discussed in his noted Oklahoma City bombings that almost seem to be inspired by the Koresh mayhem.

Now while the title is noted as “Killing Without Reason”, the instant impression I got was that most of these psychos and determined killers actually did have a reason. It just doesn’t fit into our morality of reasoning. Proof of this is documented again and again in the “Work killings” episode which details the origins of “going postal” and how the psychology is revealed as experts explain what there point of view might have been.

Also alot goes into the almost viral nature of these acts and sensationalism. With each of the focal episodes we get a clear understanding of different types of murder outbreaks coming from not only serial killers this round but society situations. This fact alone makes this collection a bonus that doesn’t rely of redundant serial killer overviews. The film production is professional. well shot and well edited with narration running throughout.

The collection can get quite overwhelming, so the ability to play sections provides a nice way to approach this series in pieces. One of the best I’ve seen so far, this collection is really a must have and in my opinion is much more honestly discussed than say the bias nature of Michael Moore’s films.