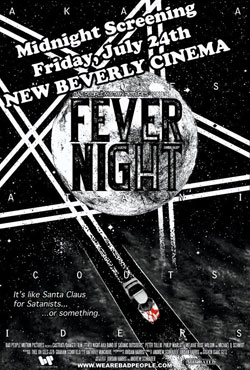 Elliot, Warren and Terry are going deep into the woods to perform a Satanic ritual. What starts as a fire and child’s play turns deadly however as accidents happen and soon the three young adults are left to fend for themselves in the woods. The three have woke up something sleeping deep in the woods though and they are about to find out that it just might not want to let them go.

In all honesty I am still trying to figure out what exactly I saw when I sat down to watch Jordan Harris and Andrew Schrader’s Fever Night or Band of Satanic Outsiders as it’s also known. The film is like a drug experiment gone all sorts of crazy, just when you think you have the film figured out it throws something else out at you leaving you just as confused as the characters in the film. Before Fever Night even begins we are offered a warning on the screen, very tongue in cheek and very old school; I knew I was in for something different.

Fever Night actually starts with three young adults named Terry, Elliot and Warren at a grocery store. The three of them are looking over the meat aisle discussing the purpose of purchasing the meat. Terry’s voice pipes up and informs the two men that the meat must be purchased so that they can have the blood for their ritual. We finally get to see our group of Satan worshipping young adults as they reach the cash register. They are short on cash and start to put some items back including a pint of motor oil that Warren says he needs for his car. At this point the viewer can already guess what is going to end up happening. While taking the supplies back out to the car we also realize that Terry has quite the torch lit for Elliot, but he doesn’t really seem to care.

As a viewer we aren’t offered much of a glimpse inside the group’s ritual. During the credits we see them standing and chanting around a fire, a pentagram gets lit on fire and they are shown throwing raw meat into the flames. This flash bang style is shown throughout the film so the viewer might want to get used to it, I’m not saying that it is bad but it does leave you disoriented and confused.
As the film starts Warren’s car is of course having problems, remember that whole motor oil controversy at the grocery. Elliot is behind the car pushing when the car suddenly lunges forward and runs completely over Terry. The black humor behind Fever Nights script doesn’t take long to come out when Elliot looks over at Warren and proclaims “No She’s not dead….She’s just real f*cked up!” Yeah it got a good chuckle out of me.

Suddenly a strange light is seen out in the distance and Elliot gets the idea that they should head towards that light and that Warren should stay back at the car with Terry. Its funny I mention light cause the lighting in Fever Night is wonderfully done, the viewer actually does feel like they are wandering deep in the woods lost with the group. As Warren stays back with Terry we are offered some creepy scares in the form of noises and the fact Terry’s eyes simply wont stay closed so she constantly just stares at the uncomfortable Warren. Elliot continues to make his way through the woods towards the light and Warren decides to go sit on the hood of the car, Terry’s stare really is uncomfortable. Suddenly a loud rush is heard and Warren is pushed off the front of the car. He screams for Elliot who comes rather quickly I might add to his friend’s side. 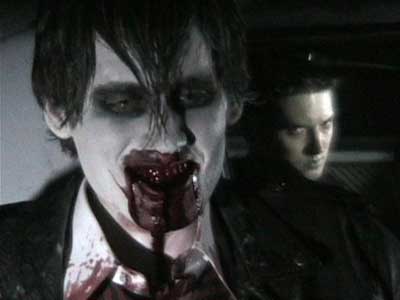 There’s just one thing though, Terry isn’t propped up by the back of the car anymore in fact it looks as if she has been dragged away. Will Elliot and Warren find Terry and get out of the woods. What exactly is that light shining down at the edge, and what exactly happened during that ritual? Isn’t worshipping the devil cool?
Jordan Harris and Andrew Schrader’s Fever Night aka Band of Satanic Outsiders is a refreshing trip back to the old school drug films of the late 1960’s and early 1970’s. Although the viewer never sees the group of three ever do any drugs we are treated as if we are on them as we watch them deal with being lost in the woods. This entertaining route allows all kinds of interesting things to happen including but not limited to a floating goat skull that bleeds, a random naked woman and her overly protective father and a whole mess of crow’s carcasses that are fresh on the trail.

The lighting and the music really do set up the mood for the film, one really does feel like they are just as lost and confused as the group of three. The cast also does a great job with their roles, these roles could have easily been hammed up but the cast of Fever Night actually makes them seem like that group of friends you see in the corner of your local bar.

There isn’t very much of a gore score for the fans of the red stuff. I will say however that when the red stuff is on the screen thanks to the lighting of the film it looks wonderful. I really can’t express how good the lighting is in this film. There is even some low brow “zombie” style of make up that is a great throwback to the days of yesterday when all a zombie needed was some paler and some raccoon eyes. This “zombie” also brings in one of the largest scares in the film as one of the three is bound inside the car and forced to listen as it kills another one of the group on the top of the vehicle. The viewer is left only hearing scratching noises and seeing blood flowing down the windshield. 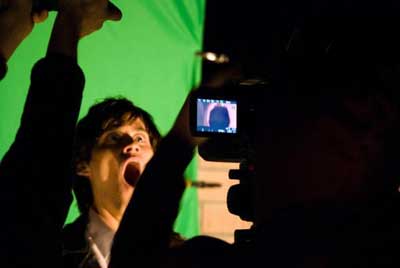 There is a lot of CGI use in the film, but unlike other films I’ve talked about Fever Night is supposed to come across like a drug hallucination (or at least I hope it was) so the CGI effects actually do help sell the film. The last shot of the film really stuck with me too, it is actually a beautiful thing to see a movie with this kind of budget look this good and deliver.