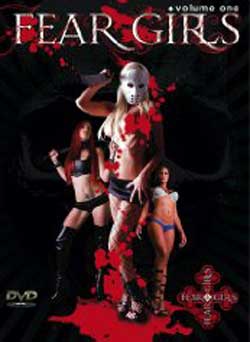 “The Night Belongs to FEAR!”

Fear Girls is not really a movie as it is a striptease showcase. Less, than an hour, it’s purpose is primarily adult entertainment. To review this is really a bit absurd as it can be summed up pretty quickly. I have noticed that erotic horror showcases such as these has been creeping steadily forward into the market. The aim of course is to provide entertainment, dancing, nudity all based around a horror theme or setup. The setups are pretty basic sometimes only ending in a blood pack drool running down there bodies. So the difference I’ve seen in these is when the editing is a bit more adventurous or the lighting setups a bit more original. Nothing here is original but it is sexy as hell!

What was funny about this was the repetition. To give you and overview usually every scene begins with one girl who dances for about 6 minutes and slowly stripteases down to full nudity. Though in some instances, the next scene was the same girl featured again, just relocated. So I kept thinking…hey I could always just rewind a bit and get back to the full nudity rather than waiting for another 5 minutes.

Heavy on eroticism and section, a few of the setups were heavily geared with girl on girl action in mind as one girl dances and the other comes into seduce her and undress herself.

What I’ve come to notice in some of these “actresses” is that they tend to appear a bit too masculine at times with an overabundance of tanning, workout training and hardened bodies. Not to mention the over abundance of fake breasts, in which sometimes the intended turn on can be a turn off. But you have to take it all in fun and honor this for what it is. It’s not p*rn, its just dancing and stripping.

The lighting is moody projecting a sort of moonlight driven effect though because this was filmed in HD the details are almost “too” clear to a disadvantage to the ladies. Because of this you see every wrinkle, blemish and and crease that would have been better showcased under a soft filter. Directed by Robert J. Massetti features the following ladies: Haze Skyler, Cameron Keys, Alisa Acosta, Ava Addams, Baun Fire, and Kendra James.

As of this review there is already a Fear Girls part 2 coming out, so I guess the idea is catching on. I would say to viewers, just be aware of what “Fear Girls” is in case you were expecting more of a cinematic adventure. Purely a horror based stripper viewing there’s plenty of boobs, bush and intimacy going on. Where’s the market for this stuff? Well I’d say anyone who purchases the Girls gone wild kind of DVD’s will be right at home here. And better yet you get alot more than college girls just flipping up there tops with a beer in the other hand. Horror fans, and fans of “the ladies” …what are you waiting for?….