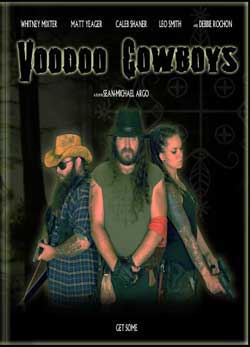 Hurricane Katrina strikes Louisiana, laying waste to New Orleans and much of the Louisiana coast. Some see it as God’s punishment, others as a natural disaster with terrible repercussions, plenty folk call it a zombie apocalypse, others just say s*** happens. But every hoodoo slinger this side of the Mason Dixon Line knows that a boko named Duv Alier used the hurricane to bind the loa spirit named Papa Ghede, The Lord of the Dead. With Papa Ghede no longer holding the doors to the land of the dead, the spirits have returned to the world, possessing the living. The only people to remain free from possession were those happy few who were spiritually strong enough to fight off the loa, or those with the gris gris charms to protect themselves. A group of slingers, going by the names of Doctor John, Reese and Shaner wander the back-roads of the South, scavenging for food and killing any zombies that get in their way. A radio broadcast from a whiskey drinking rogue disc jockey named Mama Juice tells of a powerful blues song that, when played by a slinger, can defeat Duvalier, free Papa Ghede, and send the loa spirits back to the land of the dead for good. The slingers make their way to the station through a post apocalyptic landscape filled with zombies on a collision course with Duvalier, his psychotic minions and their own troubled past. Get some.

There are number of low-budget movies that are permanently tucked away in the pantheon of incredibly bad films. Zombie Nation is one. Mega Shark vs. Giant Octopus is another. Monster High is yet another. I even own a couple. Automaton Transfusion I bought for the cover alone. Wrong Turn 3 I own because I’m quirky about finishing off my collections. I also own a number of Troma movies. I own and enjoy these movies because even in their shortcomings they can be immensely fun to watch. There is a place in this world for a well-crafted horrible movie. Unfortunately, the production value of Voodoo Cowboys is so bad it drains it of most of the entertainment value it could have had…even as a bad movie.

Read that synopsis again. It has some merit to it. Voodoo is great fodder for horror films. Movies like Angel Heart and Skeleton Key are perfect examples. Add to the mix some zombie action and I’m all in. The problem is that I had to read that synopsis after I watched the movie to understand what it was I just saw. Don’t get me wrong, I got the gist, I just had no idea who was who or what was going on until half way through the movie because the sound engineering on the film was so bad. Throughout the movie the ambient sound was louder by half than the dialogue, forcing me to watch with remote control in hand, turning up the volume to hear what the characters were saying only to jump out of my pants when a gunshot when off or someone shut a door. The actor playing Mama Juice had the misfortune of trying to learn that funky Cajun, French, Voodoo dialect and, while I applaud her effort, it was so hard to understand at times that I found myself drifting off, not caring what she was saying. That’s too bad because (I think) she was the narrator and her voice-overs were probably where I missed all that juicy back-story that’s contained in the synopsis.

All that being said, there were some moments that I thought were nifty. Matt Yeager’s performance as Doctor John was without a doubt the shining part of the entire movie. He reminded me of a much more charismatic Donald Gibb (the actor who played Ogre in the Revenge of the Nerds movies). He lent legitimacy to the role that made me want to keep watching. There were some nice camera shots thrown in out of nowhere (not counting the one where you could actually see…for the whole shot…the shadow of the cameraman on a third of the screen), showing some beautiful countryside (which I gather from the credits was filmed in Arkansas, not New Orleans) and fun blood spatter techniques (dismemberment resulting in blood splashing onto the camera lens…awesome) as well as some innovative effects that looked like they could have been cg, though I can’t be sure. But my absolute favorite was the sequence in which, after being drawn in to the spiritual plane by mirrors hanging randomly on a tree in the forest, one of our hero “slingers”, Shaner, participates in a Crossroads type of duel with one of Duvalier’s minions, (never got this cat’s name but he looked like Jack Whyte from the White Stripes). Shaner is armed with his trusty acoustic cutaway guitar, minion dude with his harmonica and they duel until Shaner bleeds all over the fret board, and minion dude out of his mouth. I still don’t know who won but it doesn’t matter because it was so freaking AWESOME! The overdubbed music didn’t match what they were doing at all…loved that too.

Add to this a scene in which a minion checks one of his voodoo dolls to see if it’s anatomically correct, or the one where Doctor John is sleeping in the bed of a pick-up truck and wakes just long enough to cap a zombie gramma in the head, and you have some movie moments worth your time. It was moments like these, as few and far between as they were, that kept me watching. I only wish that the sound would have been addressed so that I could have really enjoyed this horrible movie.