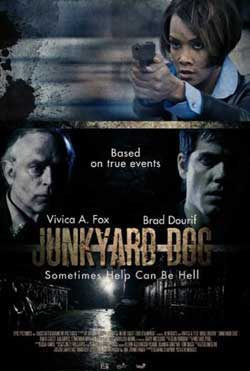 A gritty psychological-horror-thriller that delves the demented mind of a cannibalistic serial rapist who kidnaps his tenth victim in as many months on Halloween night.

REVIEW:Whenever a film is “inspired by true events”, you have to ask yourself how much is true and how much is not. No matter how you look at it, the possibility of any of the events in “Junkyard Dog” actually happening are terrifying, yet still could very well happen and most likely have happened in some sort of incarnation in real life, not the imaginary world of film. These movies are usually not very easy to watch and most of them steer off into the realm of exploiting the events with little consideration for the friends and family of the victims. “Junkyard Dog” is a B-movie without question. It is never really terrifying though it is gripping and knows exactly when to pull back. And as a bonus, though only in a small role, we get to enjoy the man known as Brad Dourif.

Audra (Galadriel Stineman) is driving down a dark road, on her way to a Halloween party with friends. Her car breaks down and she is stuck, waiting for help to arrive. In no time at all JYD (Innis Casey) arrives to help her out. It soon becomes apparent that his intentions are not to help her but to harm her. Audra is knocked unconscious and wakes up in a makeshift prison with nothing but a bed, shower, stove, and kitchen table. She is kept as a slave of sorts, she is repeatedly raped and forced to make him dinner. On the menu…… his previous victim from the month before. So he keeps his victims for one month and when he is finished he eats the evidence, as well as feed the leftovers to his large dog. Audra’s only hope is FBI agent Samantha Deatherage (Vivica A. Fox). Fresh off a tough case that had went sour and harboring some demons of her own. She is investigating alone and odds are against her. Hopefully with the help of local Sheriff Holk (Brad Dourif) they can find Audra before it is too late. 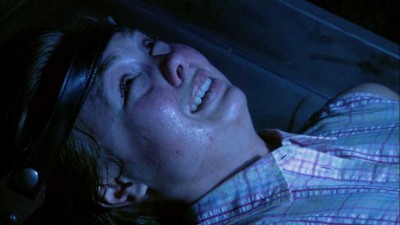 I think what works best in “Junkyard Dog” is the manner in which the material is handled. The balance between B-movie thrills and tasteless exploitation never crosses the line. JYD is never glamorized and our female leads are both interesting, strong, and very human characters. Vivica A. Fox does a fine job as Deatherage, never being a perfect agent, she makes mistakes and tries to learn instead of be a victim. She comes off a bit bitchy but it really is just a tough exterior, a complex strong woman. Innis Casey has the most difficult job, since this is just an above average B-movie with a decent production budget, he does a fine job. He’s no Anthony Hopkins but he delivers the goods, not really terrifying just kind of a despicable character. Galadriel is a talented young lady though she may suffer a bit from lack of experience. I’m confident we haven’t seen the last of her. And that brings us to good ole Dourif. He didn’t have much to work with but he is one of my favorite character actors and hits every mark with just that little bit extra most actors lack in such a small role.

There are a few plot points that seemed a bit out of place concerning JYD’s parents. Basically an underdeveloped side plot to build on character that just didn’t work. Overall, “Junkyard Dog” is a fairly entertaining thriller that was a nice showcase for Vivica A. Fox. Writer/director Kim Bass (who has a long career as a television writer dating back to the days of “In Living Color”) brings us a film that is terrifying in concept and delivers a piece of solid weekend afternoon entertainment. The material is handled with caution and care. The junkyard setting itself is a bit scary if you really think about. Honestly, just think of all the hiding places if the situation were real. 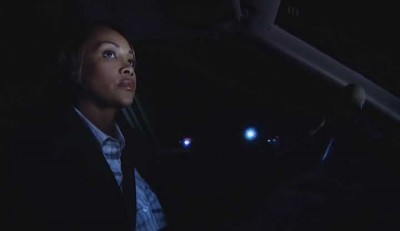