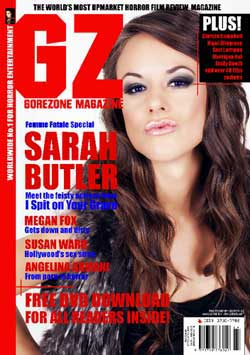 Hey folks, we are proud to present a new entry to our ongoing reviews of newly released horror magazines. We do this as a service to both announce these new editions and inform the readers a bit about the content covered. So this review might be a little more introductory than future reviews with this being a first for Gorezone’s GZ line.

For one, GZ, if you didn’t know comes out of UK and because of that is featured on that oversized paper length that give you more coverage per dollar (A4 is it??…I forget)

Gorezone magazine is a fun read with alot of sex appeal. It’s one of the few horror mags that actually prints “some” nudity within and takes a more “now” approach by reporting on current gossip happenings while paying alot of kudos to women in horror.

The approach is welcome as it separates itself in that sense from other printed horror mags. This issue features alot of horror femme fatale columns, overviews and interviews. I’m not sure if this is the regular format or if it’s a magazine that sort of mirrors Maxim for horror fans…but no harm there as each of these lovely ladies have alot to say and provide some pretty provocative shots for us readers.

The articles and interviews are pretty informative, I especially enjoyed the Megan Fox one which brang me up to speed on the “where did she go” factor. It’s Hollywood’s knack for tossing talented up-and-comers around like a rag doll and then spiting them back out into obscurity. Nothing new, but an interesting tale none-the-less.

The issue also takes a bizarre move by featuring the film reviews first “before” getting to the features, which if you’ve been paying attention in US standards is a taboo of sorts. I’m actually not sure why they would put film reviews over features with the talent, but hey, different strokes…..

Make sure to check out there issues month to month or drop by HNN to catch up on what each entails. Though you’ll want to start collecting these for just the hottie shots alone. You get a pretty healthy dose of National Inquirer for horror fans info that will keep you up to speed to tweet about on your blogs. I’m pretty sure that you wont find this in your loc