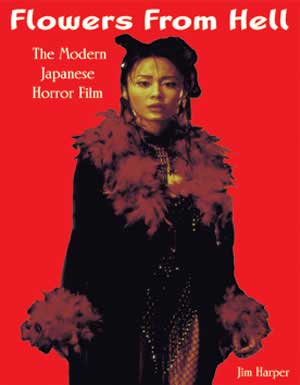 “Flowers from Hell” is a great overview of Asian horror films! Jim Harper has set out to really engage his readers by not only simply giving us a film by film description but running through them in relation to each other. Chapters are divided by like content into grouping areas of theme interest and films of impact. Many titles that I never heard of are not only mentioned but given good reason to seek out and experience loaded with tasty details that will only peak you curiosity more. The book title I’m assuming suggests reference to the more disturbing trends found in Japanese cinema. And the good news is, Jim doesn’t hold back on telling us what those films are.

For me, often I would keep a paper and pen close hand to mark down the many interesting titles mentioned in his analogies. The writing flow moves effortlessly from one genre type to the other as he presents his readers with high points in asian cinema to invite them to investigate further. The thing to note about this read is that it truly provides the appeal that horror fans are looking for in subversive titles.

In cases with other books we are given looser overviews on films to avoid and without real given reason. Jim doesn’t take the safe road and gives you the gory details you are looking for which in many cases is motivation enough.

Some areas of interest include the more thorough overview of the Guinea pig films which usually are only mentioned in passing in other books. He’s not afraid to let you know about the hardcore titles available and what they entail giving us some run downs of type of imagery and content present. In fact, with some details being extremely gruesome Jim gives you know a taste of what you can expect. For me, this is a highlight with a film genre that’s easy to find titles that bore you to death only to find out 2 hours later that they have nothing to offer. In his overview of the Guinea pig films Jim gives a film by firm breakdown of what the 6 films provide to viewers, From the visceral, to humorous to extremely dry and unnerving. If a film is a slow ride of 2 hours of crap, Jim tells it like it is.

In reading, I sensed more of a patterned journey than just your usual title for title. Jim takes his readers on a flowing more eloquently journey throught each of the chapters. In “Demons, monsters and the Living Dead” , Jim talks about zombie films and the asian take on them. We visit titles such as “Junk”, “wild Zero”, “Stacy” and Versus”. Comparisons are made to Romero zombie films and others. One of jim’s unique talents is his ability to continually cross reference back and forth like a living computer. Titles may appear several times in the book but only as they relate to the discussion at hand. While some folks might find each film to be written under a header easier, the purpose here is to tie in multiple influence and takes on how Asian cinema flows together. So even with large pages of text, the narrative flows easily enough to follow. Of course favorites films stand out with Jim and are featured more heavily than others. I suppose this is so time isn’t wasted talking too much about films that didn’t add up to much. From this ongoing essay I have embedded to memory several titles that I’ll be checking out more because of it. For instance the film “Wizard of Darkness” which I never gave a glance on shelves has been presented as quite an intriguing film.

In “Psychos and serial killers” we explore several stand out titles such as “Suicide Club” “Cure”, “Another Heaven”, “Audition” and “Freezer” His tie in with director such as Takashi Miike are introduced more per their contributions to the sub genres rather than a director to director overview. Several more chapter delve deeper into the Asian horror wave that came upon us shortly after the releases of Ring. Jim tackles vengeful spirits, The Juon cycles, mutations and several other waves of horror. My best advice is to read chapter at a time, and investigate the recommended titles. The book is based more with concentration on themes, so with it comes several mentions of releases in each chapter. Much too much to try and read the whole book and backtrack.

There is a significant pro and con to this book. The cons are you won’t get enormous analogies of most titles or elaborate back stories., The pros are you can get that with several other book releases, so perhaps a more direct simplified approach is a welcome inclusion to a already growing Asian Film book library.

A beautiful book printed on solid semi gloss papers featuring a spot gloss cover, a middle section with vivid color images and a nice section of B& W images throughout makes this stand out choice for asian film lovers. With a variety of asian film choices on the market, flowers is laid out with intent on reader fascination . I found it hard to put down with its essay like structure and a volume full of images through out. This has easily ranked as one of my more favorite books on Asian Horror and to be more specific Japanese. On a special note to horror fans, there is much mentioned through out that is filled with unique stories and imagery that will change your viewing repertoire with incredible culture and intensity.