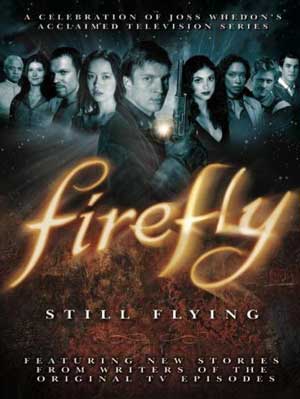 I’ll admit to never getting a chance to check out the series when it was live though I did see the film “Serenity” that this series went on to for a full featured film. For the record, the film Serenity was a continuation of this cancelled series that was aired on Fox. Serenity is also the name of the ship featured in the tv show.

So what are we talking about here? An american space western as its named on sites created by Joss Wheldon. The book “Firefly: Still Flying” is a great overview, collectable and showcase of the series chock full of fan goodies to look over, admire or just be entertained. The book features a chapter on each star member of the cast with several personal accounts about their experience on this series.

What do I get from their responses? They really enjoyed working on this series!. As several of the cast members mention the action, the friendships, the gags and the general excitement to go to a job they love everyday. Too bad that notion couldn’t have carried the series a bit further. As in similar books of this style, the book also is loaded with color photos, set designs, cast photos, behind the scenes shots, story boards and model sketches. For me, since I was a general newcomer to the show was the surprise of seeing one of my new favorite tv actors Morena Baccarin (the alien queen from the TV show “V”) in a very different look and role. I suppose I should have known her legacy into “v” but sometimes actress backgrounds don’t always pop out with information. This was one case where her much lighter skinned “V” role takes on a difference of appearance than her “Firefly” role.

Weapons and story boards are a favorite inclusion for me however I also enjoyed reading about the writers take on the series. For instance its mentioned how the show had to be written in segments so that each impact moment was presented right before a commercial break so that it would create maximum impact leading viewers back into the show “after” commercial. Ya that makes alot of sense to me …I remember them sticking to that idea even as far back as in episodes of Brady Brunch. “Mom always said, don’t play ball in the house!”. Anyway’s, getting back to things….this one also includes a bunch of newly written “Firefly” stories, alot of set design shots, and a nice helping of artwork used for the production and building stages of the show. Casts shots are vivid and a large part of the books makeup. Fans of 3D will enjoy the sketch to finished renderings sections, that are largely dedicated to the ships used within.

The book is perfectly laid out with interesting designs and layouts around every corner. In fact I think its safe to say that it has the “Titan Books” look written all over it which is a great thing. Though the book review would not be complete without a mention of the contributors. Ben Edlund, Jane Espenson, Brett Matthews, and Jose Molina provide the stellar collective work that makes this a fine sci fi keepsake for the shelf. I think it also serves its purposes, which is to get fans or newcomers excited about the cancelled series to maybe take that extra step of retro watching what they created in 2002