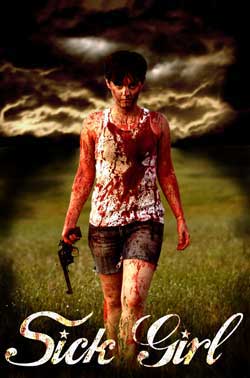 Young Izzy (Leslie Andrews) is a girl with issues. Her parents may be dead. Her older brother is fighting in Iraq and she’s raising her younger brother, Kevin, all by herself. Things are tough but, with the help of her motorcycle-riding friend Barney, she deals with her situation the best she can. Unfortunately, Izzy isn’t exactly stable… and her way of dealing with life’s problems includes finding people to torture and kill in the barn near the family home! When a trio of bullies picks on her brother Kevin at school, all hell breaks loose. The two that die are the lucky ones…

This sick and twisted independent film from director Eben McGarr is filled with black humor, excellent performances and shocking scenes of extreme gore. SICK GIRL is “low budget cinema at it’s best” (IMDB.COM) and will have horror fans laughing and screaming with delight! Also watch for Stephen (FRIGHT NIGHT) Geoffreys, returning to the horror genre after a 19 year absence.

Straight off the Synapse line of cool and quality releases comes this new gem that fits just perfectly into the rage of angry teenagers, murder, mayhem and chaos all rolled in one type films. Of course we are talking about our rather rather unusual, psychotic and cute at the same time main focal of the film Izzy (Leslie Andrews). Izzy is best summed up as extreme with issues, cold, relentless and sadistically enjoyable only as a film villain. While girls of this age tend to have freak out moments, they usually don’t act on the murderous impulses. Well Izzy does out of protection for her family, self indulgence, vengeance and at some point in the film maybe even a hormone release of anger.

The film was written and directed by Eben McGarr as a debut film introduction, which after seeing this I’m sure is well on his way to other future projects. For one I loved the 70’s film look of the movie that helped to secure the grittiness needed to add that extra touch that you might find naturally in films like “Thriller: the call her one eye”. To be honest, I would say this was shot on film, but I could be wrong.

Rural america seems to be a common local for odd family situations. In the case of this family, Izzy lives with her older brother Rusty (Chris W. King) and younger brother Kevin (Charlie Trepany). The parents are assumed to be away at war, though we quickly get the imrpession that they are dead and gone. Barney (John McGarr) is the friend of the family who comes by quite often to help, hand out and provide best friend care to his best friends families kids. The older brother Rusty announces he is leaving to go in the military and help fight Iraq. Izzy who has a uncomfortable crush on her brother doesn take to kindly to this idea.

As we begin the film, we are introduced right away to the wrath of Izzy. With a talent for hitchhiking and killing off the unlucky travelers, she begins with a school bus of nuns and Catholic kids who she appears to snuff out rather quickly. But of course not before knocking one of the nuns over and pissing on her. Kids will be as kids are ….which sets the spark into motion laughing behind her back and making jokes. Though Izzy has a vicious mean streak which escalates into other plans for the snide little school girls.

You might be asking yourself, is this a revenge film? I’d say not so much as just a wired up messed up female who plans out her torturous attacks. Though even for a violent film the results are shocking but flow naturally with the progression of the character. Like a Chihuahua she’s cute and lovable only until she isn’t. The tagline of the film says it all..”Say hello to Izzy. Then say goodbye. ” Caring for her younger brother Kevin is the top priority now. This means striking upon those who mistreat, abuse or ignore him. That notion comes with some pretty shocking results at times. I’m willing to bet this film contains 1 scene that you haven’t seen before in cinema…at least presented as a horror film. You’ll know when you get there ….crazy sh*t..though!

Another mention worth of choice is the new appearance of actor Stephen Geoffreys who you might remember from the film “Fright Night” as the awkwardly spoken Ed Thompson. Anyways in background checking Stephen has been absent from the main screen for 19 years which between that period has appeared in countless roles for gay p*rnographic films. Quite an odd career choice to embark on though its good to see he’s moved on to horror films again. His role as the quirky rat loving Mr. Putski comes with that ..hey I’m remember that voice,….guy” role. Geoffreys integrates into the genre with ease and provides a quality addition. Good to see ya again on the circuiit…hope you got that gay p*rn thing out of your system.

Final words? Creative…cold and brutal. This film rocks the rural scene with the power of a Banshee transformed. Izzy is the new anti hero for women to either unite or despise entering a realm of applauded on-screen violence that shadows the frustrations of a current culture pissed off with the way things have shaped into. Sick Girl is definitely one to own in my opinion….it’s a got an honest rawness that just simply works especially for fans of 70’s style violence exploitations. totally badass!