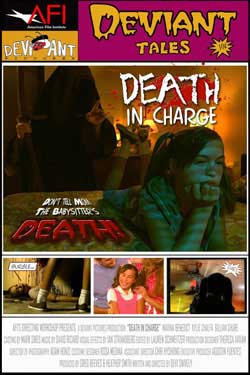 Whitney teaches Death about life’s many marvels through violent video games, macaroni and cheese and the magic of Sea Monkeys. However, when Whitney reveals some dark tendencies of her own, it’s up to Death to lighten things up before returning to the grim duties that lie in wait.

Death is on her usually mission. That is….. crossing souls off of the list of life as they meet their fateful demise. When overanxious mom is late for her night out, she fails to recognize the babysitter that comes knocking as anything except a teenage goth. Scythe in hand, death enters the house and introduces herself…..but mom mistakes her for Debbie, the babysitter on schedule for the night. She also isn’t aware that death just claimed Debbie’s soul right before her arrival.

So Death now in charge of watching the daughter for the night gets a bit of a vacation as she is entertained by the young one. They play games, eat macaroni and cheese and even toy with sea monkeys. Though when the young girl tells of how she hates her mother and wishes her dead, she has no idea that she is speaking to the reaper herself. The short film has that essence at times of a music video look, not so much in editing..but in the color choices made. In fact I read somewhere it presenting itself as hyper surreal which is a fair assessment at times. The humor is bleak and dark but still way within acceptable viewing ranges.

This short is produced by the team at Deviant pictures and is done in a charming insightful way in just the tradition that horror comedy shorts should. Devi Snively, a regular in the short film department of releases directed and writes this little 15 minute piece. The film stars Marina Benedict as Death, with Kylie Chalfa as Britney. A fun little piece!