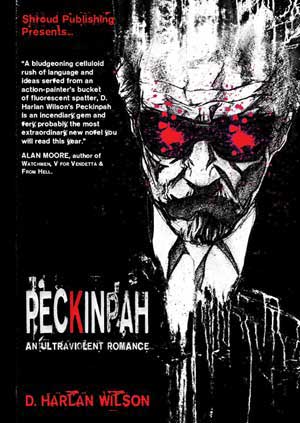 Picture this: you spend an entire weekend of this year’s Context hearing repeated glowing praise of a certain book after a month or so of prior buildup. Over the preceding year, you’ve come to trust Shroud Publishing as a solid and respectable source for your wet and glooby needs. Then there is the swooning endorsement of the book by the great, grisled Alan Moore. Also, it sports the name of one of your favorite lost directors and promises a fair share of blood and destruction from a guy renowned for his unhinged approach to fiction. Like a young boy, giddy with Christmas morning endorphins, you tear into it with wild abandon to an end result of jubilant, gaping… meh.

But let’s back up a moment, shall we?

Pekinpah is, superficially, a tale of bloody revenge in the docile Midwest haven of Dreamfield, Indiana. A gang of evil ruffians roll into town, bent on chaos and destruction, putting holes in everything in sight. Usually in drawn out slow-motion ballets of death. The town has no hope against these marauders of the flat plains until their leader, Samson Thataway, kills the wrong woman. Cue bombastic soundtrack as Felix Soandso lays out some justice.

This is a place we’ve all been to before, except it isn’t remotely. Wilson presents the story in rapid-fire bursts of images in a literary equivalent of the meth addict MTV style of movie editing. The result is disjointed, jumbled sensory overload that spills over and through the eyes, munching brain tissue. The images themselves are absurdist renderings of upended suburban utopia viewed through a lens smeared in lysergic acid. The chapter that compares itself to a Monty Python skit as directed by (you guessed it) Pekinpah pretty well describes the whole thing.

There are moments of absolute brilliance to be found here. The usually overwrought wordplay occasionally reaches levels of the sublime and it is hard not to laugh at the Big Bad screaming for a “talk doctor”. The moment Felix spends discussing his deep affection for his wife’s butt dimple is actually quite touching. Also, this is a very Literate tale, filled near to vomiting with Symbolism and Ideas. But those moments aren’t enough for me.

As off the wall, goofy and artsy as Pekinipah is, it feels like an empty intellectual exercise. I get what he is doing, or at least what he is attempting to do, but it doesn’t work for me. The binary view of literary rules as tree branches (“They can grow, or they can be torn off and fed into a woodchipper.”) cripples the work and any true sense of the freedom to which the author aspires. To me, this exemplifies the laziest and cheapest form of Deconstruction, the kind that completely misses the second and most important part of the process: the construction of a new paradigm which takes the information gained from the destruction of the old into account.

All told, despite being floored by the flash and style present, this story left me cold. The histrionic antics and ooo-ooo-gaaa oddities struck me as exactly that, without any lasting effect. It was painfully obvious to me that Wilson was trying his own posterior dimple off to be weird or, as he puts it, irreal and that kills the effect. Worse, there was no emotional core for me to grasp. With names like those mentioned before, I can’t imagine that even the author thought of them as anything more than wafer-thin wisps to be blown apart at his behest. This is what happens when authors try too hard to be Literate and don’t put the story above their ego.