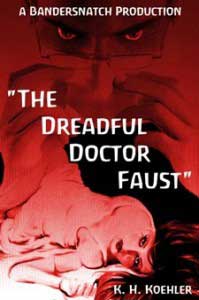 “Three victims disappear off the streets of New York, never to be seen again: a high school janitor, a top New York model, and a barkeep. Three people who have seemingly no connection to each other. Yet all three are connected to Louise, a teenage runaway who has recently gone missing.

Louise came to the big city to create a new life for herself. That life ended when a cruel sadist abducted her, mutilated her body and face, and dumped her remains in the East River. Not quite dead, she floated ashore to the ruins of an abandoned church. There she was found and saved—but what saved her wasn’t human. He hasn’t been human in well over one hundred years.

The underground calls him the Doctor, a shadow-figure who wields the powers of life and death in equal measure, and for his own dubious purposes. A Victorian-era, genius surgeon who has discovered the secret to not only defeating tissue rejection, but immortality itself, he rebuilds Louise, giving her a new face, a new identity, and a taste for revenge.

Now Louise is back, remade and redesigned into a perfect murder machine by the Doctor’s talented hands. She is cutting a path of vengeance through the echelons of the city, from its lowest bowels to its loftiest towers, and nothing in heaven—or hell—can stop her.”

K.H. Koehler has taken a giant leap into the deep realms of darkness with her absolutely stunning new novella “The Dreadful Doctor Faust”. Her young adult novel “Raiju,  a wizard and Japanese monster extravaganza, which I absolutely loved, showed a promise of things to come, and boy did she ever deliver with Doctor Faust.

This is dark fiction at its best. You could call it a modern twist on the Frankenstein / Faust mythos, but that would be selling this story short. This tale stands on its own with an underlying darkness that reaches deep into the soul and rips it out at the roots.

Koehler’s  prose drips with suffering, pain and vengeance. The main characters, the Doctor and Louise are deliciously evil and sympathetic, with a believability that makes you hang on to every word, turning the pages furiously to see what happens next.

“The Dreadful Doctor Faust” comes in at a short 92 pages but its depth, is only surpassed by its visceral impact. It is fast paced, superbly written and one of the darkest stories I’ve read in a long time.

My only complaint would be that this wonderful, chilling, atramentous journey came to an end much too quickly. Hopefully Ms. Koehler plans on continuing the tale of the good Doctor and Louise, it would be a shame not to tell more of their tale.

As you can probably guess by now, I loved this story and it comes with my highest recommendation.