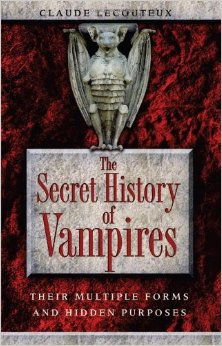 THE SECRET HISTORY OF VAMPIRES:
THEIR MULTIPLE FORMS AND HIDDEN PURPOSES

Alot is misunderstood about the origins and legacy of the vampire creature. So much that over the years the interpretations have blended together based on legend, myth and cinema so much that we are at current state to believe the assumptions. Author Claude Lecouteux has compiled a rather collective and informative overview of the vampires so titled “The Secret History of Vampires”. The study is a historical overview that also breaks itself into categories of different relationships. Readers might find the number of relative chapters of interest that discuss denizens such as Grobnik, Opyr, Nosferat, Stigoi, Stafia and others. The descriptions go on to describe the varied associations of madmen, monsters and specifics to these beast.

What is most intriguing is that the vampire legend is rather a culmination of the originals of 3 main authors or contributors that are combined in a sense with mythology over the years creating all the combined characteristics into the vampire or Dracula we know and love.

Traits such as bats, garlic, seeping thru keyholes and coffins were factors that culminated rather than 1 specific origin. These first authors were Dr. John William Polidori, J. Sheridan Le Fanu and the ever popular Bram Stoker. Upon reading you start to see the factors intertwine with early tails of Carmilla and her seductress power of sensuality. Stoker’s introduction of Van Helsing and the family legacy…… and Polidoris writing of a creatures with white skin, pale with blood shot eyes.

Lets not forget the Christian addition which tells of warriors who fight for God, Vlad who was cursed after slaying thousands upon thousands and ruling with an evil hand. It all is provided in a fascinating way that had me connecting the dots at every turn. Quite a different series of events that lead even up to know and the popularity of films such as Twilight and Interview with a Vampire.

I’ve seen quite a few books on Vampires this last year almost pouring out with over saturation. What makes it regarding is when they take on different tones and historical data. Author Lecouteux asks and answers the things folks would like to know…such as “the emergence of Vampirism”, How to kill them or better …how to protect ourselves from them” and a study of Vampires from other countries. What I found most interesting was in the lore of cultures over the years..such as “tears that fall on a dead body prevent it from resting in peace”, or maybe “shouting the name of a dead person will wake him”.

There of course is much more to entertain your old school sense of superstition and curiosity. You might recognize factors that have influenced modern vampire movies in subtle ways. Vampires..to be or not to be….., that question seems to get asked and analyzed quite often that it makes you curious enough to pause on the notion..”what if”

The book is comprehensive and small enough to provide a source as a great sit down-with-coffee book. Vampire lovers will in fact love this book, though it only provides a small pictorial middle rather than illustrated through out. The Secret History of Vampires feel comprehensive intriguing enough to perhaps give you an edge over vampiric discussions in the future …enjoy!