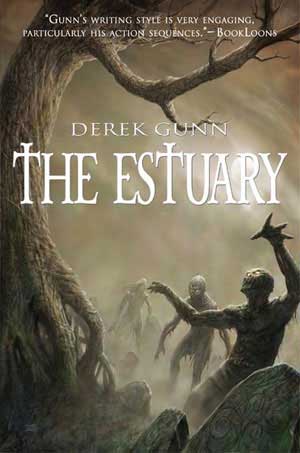 Dublin, Irelands’ Derek Gunn is best known for his Vampire Apocalypse novels of which the third will be released in October. I myself am more a fan of stumbling biting zombies rather than vampires, so I was very excited to see how his first zombie novel would turn out. From the first page of the prologue I realized Mr. Gunn was not going to be content writing a simple zombie novel.

The Estuary is a complex tale that had me turning pages non-stop beginning with the history twisting prologue featuring Nazi navy officers and their tense late night meeting with the dreaded SS in order to carry out a top secret mission. History has told us that the final days of the Third Reich were filled with studies of sciences gone insane and even searches for supernatural powers that could be used against their enemies. Mr. Gunn twists history in a believable and original way, all while casting the blame for the future suffering of idyllic Whiteshead, Ireland of the head of one of histories most heinous villains, Hitler and his army.

As the story begins we meet journalist John Pender and family, living of the mouth of an estuary, across from a legendary keep, in the lazy sea side town of Whiteshead. Mr. Gunn paints a vivid and beautiful picture perfect town for all his well crafted characters to live in, complete with a mountain range bordering on the three sides opposite the estuary and the ocean there. One of Pender’s three children cuts his foot on a partially uncovered Nazi submarine and so begins the chaos. A small group of bored out of work factory workers uncover the secret inside the sub and become the first “infected”.

Mr. Gunn uses science (Ala Michael Crichton) to explain the cause of the sudden zombie outbreak, the dead need alkaline rich blood to sustain. His walking dead are grey skinned and lumbering shells of their former selves; silent, stiff, and relentless. Once the undead begin attacking I feel Gunn took the preverbal “high road” as instead of relying entirely on graphic violence and gore he uses the scene and character emotions for the terror of the moment. Some gore hounds will be let down but I personally thought a completely silent zombie attack with seagulls singing in the background seen through the confusion shocked victim is a much more ambitious and realistic scare.

Quickly after the virus is discovered the town is placed under military quarantine, unbeknownst to most of the towns’ people. Once the solders take up posts around the town the story takes an even broader focus. The infected swarm the early morning streets and the living begin to flee, meeting one-warning-shot-then-your-toast army patrols from both Ireland and Britain blocking all exits. The panicked towns’ people realize they are trapped and chaos ensues. As they return to town en mass they run smack into their friends and neighbors now hungry for their blood. Mr. Gunn gives each and every character very human traits and when the living and the dead converge on town square the scene is terrifying and realistic.

The individual zombie attacks cease and their threat is their sheer number. No doors can hold against the weight of the horde leaning on them, making hiding anywhere a temporary shelter at best. The majority of the town behaves as the majority of people really would behave under such circumstances and panic; running in circles till the swarm of zombies swallows them up. A few everyday people become heroes, be they organizing survivors, plotting a daring escape to the legendary keep in the estuary, fighting the horde with what ever weapons they can find, or even giving their life to buy even a second more for the other living souls.

The story is tight and quick never easing up on the beautiful bleakness of the setting and the dangers surrounding them but the characters always have a strength that never lets them give up hope even as the odds of surviving grow smaller and smaller.

The scares here are realistic and human, so to me the feeling of terror is more prolonged never wavering till the last page. The Estuary is a zombie novel but it’s not just for zombie fans.