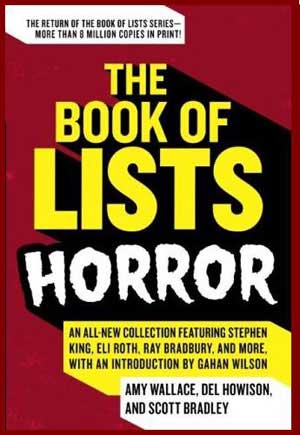 For those who perused the site, know that we here at horrornews.net love the “lists” with a section ourselves focused on all kinds of cool horror listings and compilations. So of course I was excited when Harper Collins sent over the official “Book of Lists – Horror” Now this is no mere pamphlet with its volume totaling 410 pages of nothing but lists. Authors Amy Wallace, Del Howison, and Scott Bradley compiled a list book that horror fans could really get the most our of. When you see the title, “lists”, you instantly think of just that. A page with a list. Though if it were only that it would be much the shorter of a book. What the authors have done is provide the lists and description paragraphs with each title to provide a complete overview of the content mentioned and how it relates to the listing its been assigned too.Pretty cool !. The lists themselves have been provided by a number of well know industry folks including authors, directors fx artists, producers, filmmakers and so on. Each list of course includes an introductory bio of the person who submitted.

Amy Wallace one of the main authors has authored 14 previous books one of which was the best selling “Book of Lists” which sold 8 mill copies. Here co-authors Scott and Del have also made there rounds in several publications, horror magazines and variety of horror related tie-ins such as the Dark Delicacy book store and previous efforts with Amy. A bright and knowledgeable bunch.

For content, it really runs the gamut of categories and match-ups. Some are to be taken seriously with others that are amusing and fun. Topics include listings such as “Eli Roth’s top ten nastiest horror movie genital mutilations”, Tim Sullivan’s’ 13 favorite splatstick moments”, “Robert Kurtzmans 10 favorite creature features” or “Five horror films that claim to be based on true stories”.
Of course the amusing ones always provide a special take on the entertainment. One’s I loved included “Bob burn’s 8 worst monster movie costumes”, Victor Salva’s 10 things we have learned from horror movies” or even “Josh olson’s Ten best horror movie sex scenes”. And of course a the hilarious “Neil Marshall’s’ ten best movie bovine fatalities” (cows death scenes, for non mid-westerners). Let’s not forget “Sarah Langan’s top 10 stupidest horror movie decisions”.

Others gear at educating the readers on great films that missed the radar such as “David Wallechinsky’s six overlooked horror films” and best of asian films lists. All of them interesting and chock full of information you probably never knew.

Though it doesn’t stop there, the authors dedicated an entire chapter just to the “Literature of the Dread”. Which collects several more interesting lists from famous authors such as Stephen King. Ramsey Campbell, Jack Ketchum and Poppy Z. Brite to name a few. These go more into book lists, favorites, fav categories reads, short stories, quotes, memorable moments and so on. So if your a horror reader there’s lots to go on, if not then alot of these titles probably will go overhead.

Chapter 3 is focused on music, videos, songs, and soundtracks. Interesting but only really covering about 10 pages. Chapter 4 is a coverage of more miscellaneous subjects which is my favorite chapter. It goes into lists on tv shows, comic book covers, board games, video games and horror hosts. Chapter 5 is bit of the same but covers more in the comedic realm with titles such as horror c**ktails, things HP lovecraft would ask for in a bar, Freddy Krueger offshoots and even films that were unintentionally horror. The writing is clear and easy to understand and best of all easy to skip to different sections of interest with bold titles and numbered paragraphs.

If you get the drift, this book is alot of fun, is big enough to engage the readers and as mentioned is really educational on many levels. A perfect companion to road trips or folks with short attention spans

Tags The Book of Lists Horror