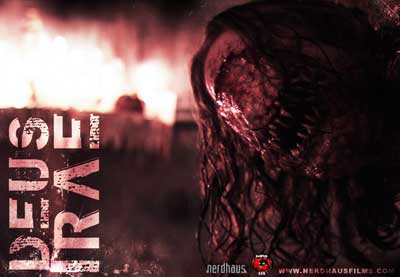 Exorcism. It’s a dirty job, but someone’s got to do it.

It really gives me great pleasure when I can say this about a short film these days among all the titles that come thru our neck of the woods. Deus Irae is one incredible piece of work! But accolades aside, a better way to put it is….imagine that you have just switched on the TV that is in the middle of a really dynamic horror film. You don’t know the much about the premise but the action, FX and situation comes at you like a wall of bricks. This was exactly my impression of this horror short directed and created by Pedro Cristiani. 3 demon hunters enter a room, with the assumption of exorcising a young child. Sound familiar? Well maybe partially, though they proceed to go about their business with a certain confidence and assurance that you “know” they’ve been down this road before. A few mutterings about levels of hell, demons and some observations on the surrounding and the 3 go to town like pros.

As they cleanse the room and confront the evil, dark mangly hands reach from under the bed, a stained impression of a bug filled demon impression covers the ceiling and the room begins to take on its own level of evil.

Better yet, when the main priest jumps into the child’s lap, he proceeds to beat the crap out of her revealing something disturbing, deranged and deformed lying under her skin.

This is what Deus Irae brings to the table. The FX work is immediately impressive, with a sense of sound and cinematography that reeks of veteran professionalism all around. I don’t think I’ve been more surprised in a while by the level of unity that this short brings in its a “quick and get to the point” amount of time.

If you get a chance, I strongly urge you to check this out this film now circulating around film festivals as you won’t be disappointed. The short is produced by Nerdhaus Films. I’m more inclined to say that Deus Irae delivers more in its 13 Minutes than I’ve seen in several 90 minute features. Let’s hope this idea finds a bigger home in the full feature arena.

Make sure to check out the stills below: