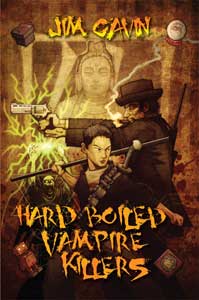 “Most people would call Ty Trotter a loser. He lives off his vampire girlfriend, can’t hold a job, drinks and smokes the cheapest stuff on the shelves, and is Chairman for Life of his own Pity Committee, spending all his free time getting drunk, watching late-night TV and feeling sorry for himself.

Most people would call Ed Ma a nerd. He lives with his parents and attends school part time. He doesn’t have a job, doesn’t talk to girls, doesn’t know how to network, and doesn’t know what he wants to do when he finally grows up. He does what his momma tells him and always tries to be a good son. He spends all his free time either at the gym or on the Internet.

But while most people are asleep, Ty and Ed roam the streets of Atlanta, pushing the darkness back an inch at a time by any means necessary. You see, they hunt vampires, the parasitic undead that threaten the good people of the city. Ty snipes them with a big-game rifle, Ed cuts ’em down with a sword backed up by Kung Fu power.

Maybe they really are losers. They sure ain’t registered voters, college professors, or member’s of the Chamber of Commerce. But they are…Hard Boiled Vampire Killers.”

“Hard Boiled Vampire Killers”, OK, I know what you’re thinking. Oh no, not another vampire book. In some instances I would wholeheartedly agree with you,  in the case of Jim Gavin’s debut novel from Dark Regions Press you would be wrong.

“Hard Boiled Vampire Killers” is a rip-roaring, gun-slinging, ass kicking, Kung Fu, vampire and ghost extravaganza that does not disappoint and is a welcome addition to the genre.

Vampires are huge right now and for some, that is a bad thing because of the glut of vampire stories and movies that, well, to put it bluntly suck.

I tend to look for the positives in the vampire genre, sure I have read some lousy vampire books and seen my share of crappy vampire movies but there is always exceptions

Jim Gavin breathes new life into my beloved vampire genre with a story filled with interesting characters, wonderful vampires and ghosts and enough action to keep you turning the pages at a feverish pace.

The most impressive aspect to the book for me are the two man characters Ty and Ed. They are fully developed and realized characters that seemingly jump off the pages. I found myself cheering on their exploits, pulling for them to pull off the impossible and save the day.

“Hard Boiled Vampire Killers” might just be the most fun I’ve had reading a book this year. The vampires are ruthless and vicious, the way they are supposed to be and as Brian Knight so eloquently said in the introduction “Real vampires don’t sparkle.”.

If you are tired of romantic, wimpy, depressing sparkly vampires, look no further than Jim Gavin’s exceptional “Hard Boiled Vampire Killers” to get your fill of vampires that are actually vampires. 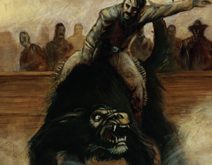