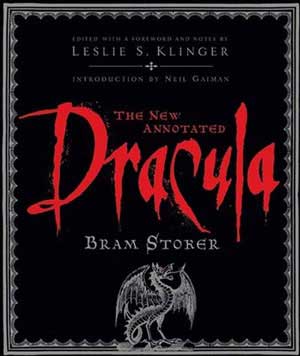 Readers of Dracula have been entranced by the story of Jonathan Harker’s visit to Count Dracula’s castle, and the events that followed, for over a century. The novel takes you from Harker’s extraordinary escape to the search for the reason why Lucy Westerna suddenly falls ill after a peculiar Russian ship becomes shipwrecked on England’s coast. Following Lucy’s eventual fall to Count Dracula’s attack, Van Helsing, the Harkers, and their friends desperately seek to save the Count’s next victim, Mina Murray (Harker’s fiancé), from the same deathly fate.

Leslie S. Klinger’s New Annotated Dracula takes the story to a new level. Already known for his New Annotated Sherlock Holmes, Klinger is a veteran at digging deeper into classic literary texts (especially that dealing with the Victorian era). In The New Annotated Dracula, Readers will find over 1,500 enlightening annotations that serve to help paint a fuller, more encompassing picture of the story of Dracula, the Harkers, Van Helsing, and the history of Victorian England.

Accordingly, what follows is a review of Klinger’s annotations, rather than the novel Dracula itself. The review serves to differentiate the original novel from the vast additions to the novel that are found within Klinger’s annotated version. With that said, Dracula is a wonderful story and one of my personal favorites, from both a literary classic and a horror novel standpoint.

Before even opening The New Annotated Dracula, the astoundingly huge hardback book is enough to make any vampire lover do a double take. The beautiful cover, with an appropriate picture of a dragon engraved on it (the reader discovers why this is so fitting in Klinger’s “Context”), makes for a wonderful coffee table piece. What waits inside, though, are annotations that take the reader through the novel in a way that has not previously been done. While there are many other annotated versions of Dracula, Klinger’s way is quite unique; Klinger chooses to present his annotations and assess the novel through the idea that Dracula is based on true-life events. Klinger explains in his preface, “…perhaps for the first time, I examine Stoker’s published compilation of letters, journals, and recordings as Stoker wished: I employ a gentle fiction here…that the events described in Dracula ‘really took place’ and that the work presents recollections of real persons, whom Stoker has renamed and whose papers (termed the ‘Harker Papers’ in my notes) he has recast, ostensibly to conceal their identities” (p. xii).

Through this concept, Klinger presents the reader with background knowledge of the language, traditions, way of life, and history of Victorian England and the idea of the vampire. He provides overviews of other popular vampire works of the time, as well as popular books in general, to help the reader further understand the Victorian lifestyle and the impact of Dracula during that particular time period.To help accomplish this, he includes pictures, ranging from maps and diagrams to vintage photographs and detailed illustrations. Furthermore, in the Appendix, the reader can find “A Whitby Glossary,” containing a comprehensive list of words in the Whitby dialect (referring to Whitby, UK on the Yorkshire Coast) and their equivalent English meaning.

The book goes well beyond merely presenting a detailed explanation of the Victorian era and the vampire stories during that time, though. From front to back—from the “The Context,” to Part I: The Text of Dracula, to the four Appendices, to Part II: Considering the Count—the annotated novel dives deeply into Stoker’s life, as well as Dracula’s impact on society for generations (and many more generations to come). In so doing, as a way to further understand the story of Dracula, as well as Stoker’s writing style, Klinger includes the text of Stoker’s “Dracula’s Guest.” The short story also contains annotations by Klinger, aiding in a more complete understanding of it.

Additionally, Part II: Considering the Count, includes Dracula’s impact on society after the book was completed, with a focus on media and modern culture. The opening section, “Dracula After Stoker: Fictional Accounts of the Count,” begins by noting, “After Dracula, stories and books about vampires multiplied in ever-widening circles, ‘as the ripples from a stone thrown in the water,’ in Van Helsing’s words” (pg. 531). The section discusses Dracula in academia, as well as in the formats of plays and movies. Furthermore, in the portion entitled “Dracula’s Family Tree,” Klinger looks to define the vampire and note instances of when and where “the undead” were allegedly cited around the world.

Klinger’s annotated novel is a fascinating and fun update to the classic Dracula story that any fan of the novel, or of vampires in general, would deeply enjoy. Moreover, anybody who appreciates the Victorian Era and the accompanying literature will undoubtedly value Klinger’s annotations, as well. I definitely recommend picking up Klinger’s The New Annotated Dracula, whether you are a veteran of Stoker’s timeless story or a newcomer. And, with a wonderfully written introduction by Neil Gaiman, you simply cannot go wrong!