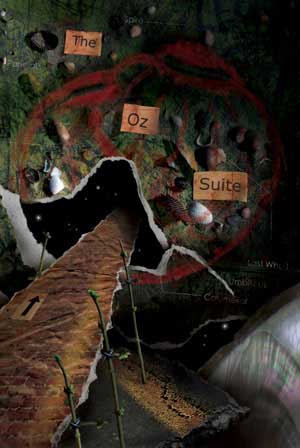 “I might have been on the Yellow Brick Road, only Dorothy and her gang had left me behind and I didn’t have a dog and it was getting dark and the Wicked Witch’s flying monkeys were in the clouds, getting ready to dive”

I remember the special kind of joy that came once a year while I was growing up, when all else stopped and I followed a young, purely American girl’s journey from the hum-drum, black-and-white world of Kansas through the brilliant, playful and more real than reality world of Oz in search of nothing more than a way home (as incomprehensible as that was to me). I remember rapture, joy, amazement and wonder at this fantastical realm. At least that is what I remember when I’m being pointlessly nostalgic and I leave out the abject terror of a little girl, alone in a strange land, assaulted from every angle by a murderous crone for a crime she had no choice in committing. And was I really supposed to trust those bright, painted on smiles and waaaaay too well-choreographed song and dance numbers from people who always said they wanted to help but who never provided any. Even that f*cking bubble blowing Glenda creeped me out, with her saccharine voice and advice that came too late to be worth a damn thing. Come to think of it, Oz was a tad f*cked up.

With The Oz Suite, Gerard Houarner has given us a collection of three tales that riff on the idea of Oz, taking it to places we never hoped to (or hoped we’d never) dream of. “No We Love No One” (previously seen in the now out of print Damned: an Anthology of the Lost) follows a young boy through an invasion of other worldly creatures that insinuate themselves into our society. “Bring Me the Head of that Girl Dorothy” is the tale of a woman who thinks that she is also the Wicked Witch (told partially through the point of view of the king of the flying monkeys), or maybe of the Wicked Witch who thinks that she is also a high-powered ad executive in a bizarre fantasy world without magic. Finally, “The Wizard Will See You Now” is about someone whose father killed him as a young boy. While only the middle tale has a superficial tie to either the Baum or Warner Bros. world of Oz, they all share the same heart. Hell, what is The Wizard of Oz if not the mania-driven, fevered dreams of a girl with severe head trauma working her way back to sanity (assuming we can put aside the whole “refutation of the gold standard” thing).

What makes all of these stories work, and whew-boy do they work, is the unbridled honesty with which Gerard approaches his characters. None of them are what most of us would call “good” people; they are selfish, self-centered and perfectly willing to destroy the lives of others for their own ends. But at the same time, it is as impossible to hate them as it is to adore them unconditionally. Just like Dorothy, they are fractured and all they want to do is put the pieces back together in some way that makes a modicum of sense. The tragedy of it all lies in their inability to do so, but there is a sense of beauty and hope in the struggle itself.

In the end, this collection comes across as an exploration of off-kilter mental states What it is that drives us around the bend, over the (wait for it) edge (ha, tricked ya!). More importantly, how it must feel from the inside of the maelstrom. Gerard has granted us a view of people who have been torn from their moorings, set airborne on currents beyond their control and dumped into an uncertain land where the reality they have been presented with seems much more than a little bit unreal. These are lives dominated by confusion, pain, anger and fear. In other words, not too far off from what we all deal with daily.

There’s a reason we can’t seem to escape Oz as an intrinsic part of the American Unconscious.