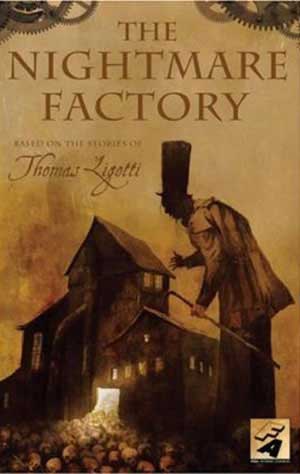 “The Nightmare Factory” as it is so called. A collection of 4 short stories based on the work of Thomas Ligotti . In fact he stopped by to include one page written introductions to all. This comic is deeper than most. It is built on high end literature. The kind that isn’t easily swallowed with stories that are bleak, droll,dreary and distant. There is not real simple resolves that present with clarity and understanding. Moreso, it is a journey of dark thoughts and madness told in tales that instantly puts this TPB into a different class of readers. Surely the artwork is beautiful stylized and done with each artists individual take of approach. It also features a beautiful cover per way of Ashley Wood. Though as a reader, I can’t say I was blown away. I guess this style of writing is best saved for that special crowd who engages into more sophisticated journeys. Ones that leave a trail of though but not enough to feel like you went somewhere and came back.

Ligotti has his own style. One that has enlisted many such fans of deep literature. His tales are woven in moods and that readers will have different outcomes of there voyages. So if its sophistication you seek, then you have come to the right place. The stories themselves take you on 4 flights of intrigue. We have “The Last Feast of Harlequin” , Dream of a Mannikin” , “Dr. Locrian’s Asylum” , and “Teatro Grottesco”. My personal favorites have to go to The Last Feast of Harlequin” and “Dr. Locrian’s Asylum” .

“Dr. Locrian’s Asylum” centers around an asylum that has a history of devious practices and lost souls. Our protagonist is tearing it down after the place being a town eye sore for many years. In fact, the town pretty much fears the place. So the destruction is a welcome site. The result though seems to unleash lost spirits who appear in every upstairs window haunting the townsfolk. This being eerie in itself just progressed the towns fear to a final end that leaves memories that haunt in its wake.

“The Last Feast of Harlequin” is story about clowns. Or maybe its a town of clowns. Though Lovecraft seems to be a major influence on this tale of a man who becomes obsessed with it’s town and it’s annual clown festival. He is about to discover much more lies beyond that which is seen to find his connection with this town and its inhabitants. The other 2 stories while imaginative, I have to say left me pretty dry. If not for the artwork, I would have to say these tales were confusing and pretty un-engaging.

A pretty solid art effort, a much more specific kind of literary effort. This book will not appeal to young readers who want instant gratification. Though readers with imagination and much more experience in deeper literature will enjoy its short and sweet does of nightmares.