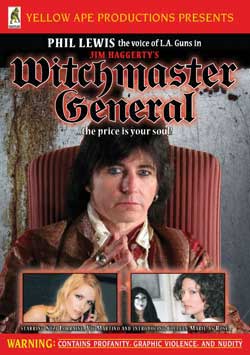 An evil Voodoo Witchdoctor runs a murder-for-hire business. He’ll do away with your unfaithful wife, your unappreciative boss, or your back-stabbing friend – but the price is your soul! |

WitchMaster General starts out warmly, as a seemingly loving couple are enjoying a romantic afternoon in the park. You come to find out this is more of a love triangle than couple with the odd man out, the woman’s husband, being fazed out by a prison stint. Out of thin air appears a woman draped in a black cloak. You come to find out the woman in the cloak was sent by the woman’s imprisoned husband. This woman, with some kind of mystical powers, deposed of the once happy couple in a very violent fashion. This is possible because the woman in the cloak is part of a black magic organization ran by Dr. Gorgon, or better known as Phil Lewis. Yes, that Phil Lewis. Hey, like I always say when times are tough there’s always the dark arts.

WitchMaster General, not to be confused with “Witchfinder General” starring Vincent Price(Don’t feel bad, I made the same mistake), is a film I would deem “awesomely low budget”. The factors here that I consider a strong suit, I’m sure someone else would consider them failings. There is quite a many funny scenes, intentional and unintentional. But it matters little because your still laughing at some of the absurdity of the acting. I hope that the word “absurdity”isn’t perceive as negative in this case, because it’s not how I intend it. I find it quite entertaining.

First and foremost, Phil Lewis(the lead singer of L.A. Guns)is quite good here. Don’t get me wrong, he’s not going to get mistaken for Olivier. But, that’s not the aim. For a first time actor, I thought his performance had some life to it. And I’ve seen some truly bad acting by musicians. Excuse me, let clear my throat for a second. Cough, cough, Jon Bon Jovi, cough, cough. Sorry, like I was saying Dr. Gorgon uses voodoo dolls, or barbie dolls if your gonna be all factual about it, as his weapon of choice. He’s able to kill these unsuspecting victims without having to lay a hand on them or for that matter be in the general vicinity.

As you can imagine this leads to some cheestasticly awesome scenes of people, for example, having to act like they’re drowning except they’re not in water or someone’s head just pops off like a football falls off a tee if the wind hits it just right. But, by far my favorite piece of acting comes from the character of Detective Stone(Martino). He’s your cliché no nonsense gumshoe. He’s so hammy that it reminds me fondly of the noir detective films of the 50’s. He’s a just man in a unjust world, trying to make a difference one punk at a time. The film is a hodge podge of a crime detective story and a supernatural one. Something that must be mention is the epic scene where Dr. Gorgon has a face to face meeting with Satan himself.

Forget all the other interpretations of Satan from “Paradise Lost” or in various movies. When you see this guy, you’ll feel foolish for spending anytime in church. Your telling me this is the guy I’ve been taught to be afraid of. Never has “The Beast” looked so non-threatening I’m almost certain they cast the guy that use to work at the Walgreen near me to play Lucifer. But, I say all this out of love. Another topic not to be ignored is the amount of nudity in this film. But not just any nudity but “Indy Nudity”. So random with no rhyme or reason and lacking the pretentiousness of it’s mainstream brethren.

WitchMaster General is not to be taken seriously on any level. For christ sake, it’s a witch doctor killing people for hire with magical powers. What kind of d-bag would I be if I came out here and went, “Oh I don’t know, it just seemed a bit unrealistic to me.” It’s goofy fun with a whole lot of blood and a whole lot of boobs. It doesn’t lie to you about who or what it is. I love a dark, disturbing film as much as the next horror geek but I can appreciate the occasional wacky flick. The acting although not very nuanced, keeps your attention at worse and is very enjoyable at best. With a film like this the goal is to give the viewer a good time and to that I can say job well done. I’d recommend it as a fun, harmless indy that goes down smooth and is a easy watch.