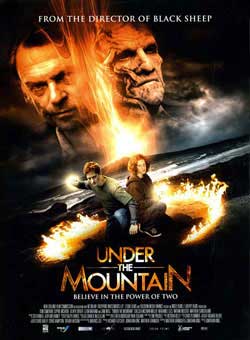 Theo and Rachel are twin siblings who move in with their aunt and uncle in Auckland after the tragic death of their mother. Once there they meet Mr. Jones, a reclusive older man who isn’t quite what he seems. The twins soon learn that a dark force that dwells underneath a series of volcanoes is growing in power and they are the only ones that can stop it. With the help of Mr. Jones Rachel and Theo set out to stop the evil Wilberforces and save the world. Will they be able to harness their powers to save us all or are they destined to fail just like the set of twins before them?

Based on the novel, Under the Mountain is a remake of the 1982 television series of the same name. The film had somewhat of an interesting premise, a couple of decent characters, and its fair share of action, but overall I just couldn’t get into it. It was more for the preteen set and reminded me a little of other movies such as The Never ending Story and Labyrinth. It had its moments but after all was said and done I couldn’t help but feel more than a little underwhelmed.

I am not really sure how to classify this film. Even though there are some horror elements in it I wouldn’t call it a horror film. I suppose it is more of an action/adventure flick than anything, though there are times it gets a little too science fictiony for my taste. When I was a kid in middle school we watched a 13 part fiction series on PBS called The Tome and the Talisman (I was sick the day they watched the last part, does anyone know how it ends, by the way?) and Under the Mountain had the same kind of vibe to it. I’m sure I would’ve loved it if I were 11, but since I’m not I just wasn’t that crazy about it. Since it did seem more directed toward a younger audience I had a great deal of difficulty liking it.

I think that the biggest factor that kept me from really enjoying it was the characters. Don’t get me wrong, everyone involved did a great job in terms of acting, but I personally just had trouble to relating to anyone in the movie. To be honest I really didn’t care if any of them lived or died with the exception of Mr. Jones (who was played by the always talented Sam Neil). There was nothing heroic about Theo or Rachel and I had a hard time buying that they fate of the world rested in their hands. I know that they were supposed to be inexperienced and not ready to be heroes, but even when they do accept their destinies they would still probably be the last people I would go to if I needed to be rescued. I am usually into stories about someone getting powers and learning how to use them but not so much in this instance.

The antagonists of the film (The Wilberforces) were probably the least threatening group of villains I have ever seen on film. They are aliens that can take human form and the only weapon they seem to have is the ability to turn their hands into these very crappy-looking CGI tentacle thingies that can burn whatever they touch. They are led by Mr. Wilberforce (who I thought looked like an older, mutated version of Crispen Glover when he was in the remake of Willard), who is as about as intimidating as Jay Mohr was when he portrayed the psycho killer in Cherry Falls. There is nothing that impressive about him or the Wilberforces when they revert to their alien form, and the very few times that it wasn’t too dark to see them I thought that they looked like rejects from the Species films. We are led to believe for most of the film that they are very dangerous but they are beaten fairly easily and really don’t put up that much of a fight in the end.

Speaking of the ending, I thought that it was one of the film’s biggest flaws. It was very rushed and anticlimactic, and I just didn’t feel that there was that much of a pay off to it. I was expecting a huge battle but it just didn’t happen. The ending pretty much consisted of Theo realizing (after being told 900 times) that his and Rachel’s powers would only work if they both believed in their “Twinness.” Once it sinks through his thick skull he pretty much becomes the Human Torch and she turns into Phoenix from the X-Men before they kick the crap out of the Wilberforces in just a few seconds with very little effort. I was really bothered by the fact that ***SPOILER ALERT*** Mr. Jones is killed and neither one of the twins really seem that bothered by it. I know that they hardly knew him but at the same time he was pretty much their mentor. It just seemed to me that he was too important of a character to just kill off and be forgotten about by everyone else in the movie as no one ever mentions him again.

Under the Mountain just wasn’t for me, but that doesn’t mean someone else won’t love it. I do feel that it is meant for a younger audience and that most kids (as well as some adults) will dig it though. I wouldn’t call it a bad movie as I didn’t think that it was awful, but I just wasn’t the target audience for it. Give it a shot if it sounds interesting to you, you may find yourself (and your kids) totally into it.

Tags Under The Mountain