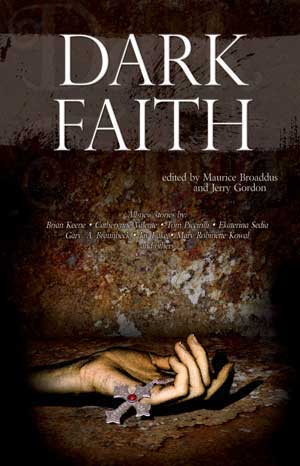 Many people believe that faith and horror do not mix, but I would be among the first to argue that point. The experience of terror is an intensely spiritual one and spiritual experiences can often be quite terrifying.

Dark Faith is an anthology that focuses on that experience of terror in the spiritual realm, an exploration of faith through horror. If anyone is qualified to put something like this together, then the sinister minister, Maurice Broaddus, certainly has to be that man. The result is something that resembles a conversation, in allegorical terms, that is at turns harrowing, hilarious, thought provoking and confounding.

Something that specifically impressed me with this collection was the variety of faiths represented. There is the rage fueled, self-directed atheist manifesto, “He Who Would Not Bow” by Wrath James White rubbing elbows with Douglas Warrick’s bhuddist lesson for a Christian God, “Zen and the Art of Gordon Dratch’s Damnation.” Later on you’ll get to see a story of old gods of the Americas (“Mother Urban’s Booke of Dayes”, by Jay Lake) bumping uglies with self-determinism of Levy/Randian proportions via arrogant birds (Richard Dansky’s “The Mad Eyes of the Heron King”). Mary Kowal’s “Ring Road” even features Baldur.

The inclusion of poetry (scarce as it is), further expands this sense of variety. The wondrous Linda D. Addison sets the tone of complexity and confounding intricacy for the book with “The Story of Belief-Non”. Meanwhile, Jennifer Baungartner managed to fit possession, murder and a total loss of the self into 4 stanzas with “C{her}ry Carvings” and Kurt Dinan serves up a tasty platter of “Paranoia” that’ll have you looking over your shoulder for weeks.

Similarly, the tone is just as varied between stories. From the unmitigated rage of Brian Keene’s “I Sing a New Psalm” and Lucy Snyder’s “Miz Ruthie Pays Her Respects” to the inner strength found in the lost past of “The Unremembered” (Chesya Burke) and the unexpected hope of “The Ghosts of New York” (Jennifer Pelland). There is not an emotional palette left undappled here.

But, without a doubt, my favorite tale here is Piccirilli the almighty’s “Scrawl”. A not so simple story of a nondescript middle aged man getting some strange. Maybe I’m a moron, but I have no idea what the hell this has to do with faith. Perhaps it is about a renewed faith in oneself? A power hidden in weak folds of pudgy flesh? Whatever the hell it is, it certainly isn’t horror! But you know what? I don’t care. It left me tittering in my cubicle like a little schoolgirl, but I wanted to howl. Also, to another pudgy, middle aged nondescript guy, it was quite empowering. Fuckin Pic, man. Fuckin Pic.

That said, devil his due and all…While there wasn’t anything particularly bad on display, there was a fair share of meh. “The Crater” and “Hush” are great examples of stories I forgot immediately after reading. They just didn’t have the emotional or psychological oomph I need. Then there is “For My Next Trick I’ll Need a Volunteer” by Gary Braunbeck, which was basically a lesson in the essential mythos to his Cedar Creek Cycle wrapped in a paper thin afterthought of a story. I’m a huge fan of the big B, but this was a rare disappointment. Richard Wright’s “Sandboys” accomplished the same thing this one seemed to be reaching for with much more grace.

Dark Faith is a gutsy anthology of a type that you will rarely have to opportunity to peruse. Regardless of your own faith, it will be tested within these pages and you will not leave unscathed.